Sierra Nevada Adventures Central Coast dual sport adventure ride explores California's spectacular Pacific Coast from the Golden Gate to the San Simeon near Hearst Castle.  The Pacific Coast Highway is world famous for running along some of the most beautiful coastline in the USA, leading to its designation as an All-American road.  In addition to providing a scenic route to numerous vistas along the coast, this dual sport adventure explores off-road through remote Redwood groves on the historic Pacific Coast road.

We’ll meet in San Francisco and travel west to the Pacific Coast. The beautiful sights and sounds of the Pacific Ocean are just around the corner as we past the historic Cliff House and travel south along the Great Highway. Our adventure continues south on Highway 1 which is famous for running along some of the most beautiful coastlines in the USA. You will have the opportunity to stop at several vista points along the way to take a break and enjoy the spectacular scenery. It's a photographers paradise along this stretch of highway so, don’t forget your camera. 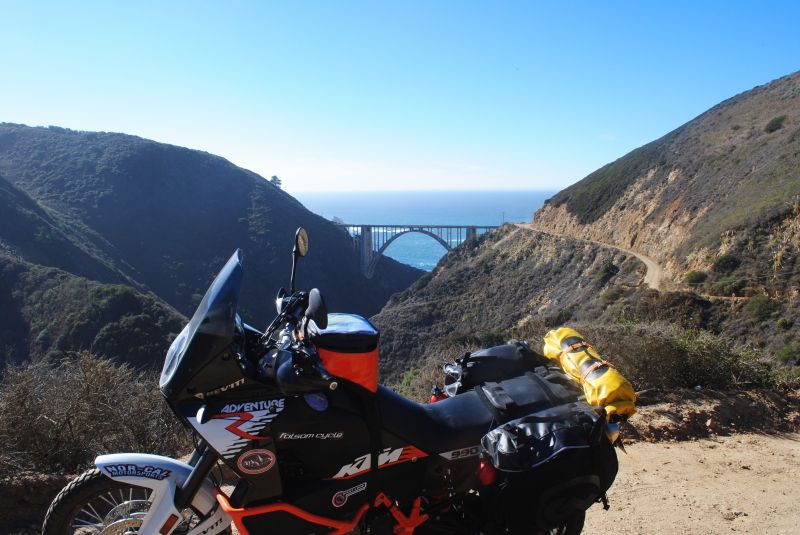 Once beyond Carmel the twisties are only a moments away and the exhilarating ride along the most rugged section of coastline in the nation awaits you. This twisting, cliff-hugging stretch of road has narrow shoulders and sharp drop-offs, so stay alert. After an exhilarating stretch of highway your off-road adventure begins on the historic Old Coast Road which ventures into the Coastal Mountains to explore remote Redwood groves and panoramic vistas. After exploring off-road on the historic Coast Road your adventure continues south on highway 1 to stay the night in San Simeon near the world famous Heart Castle. Your return route ventures north on highway 1 to Santa Cruz then travels the curvy twisty highway 9 through old growth Redwoods in Big Basin State Park and back to San Francisco. 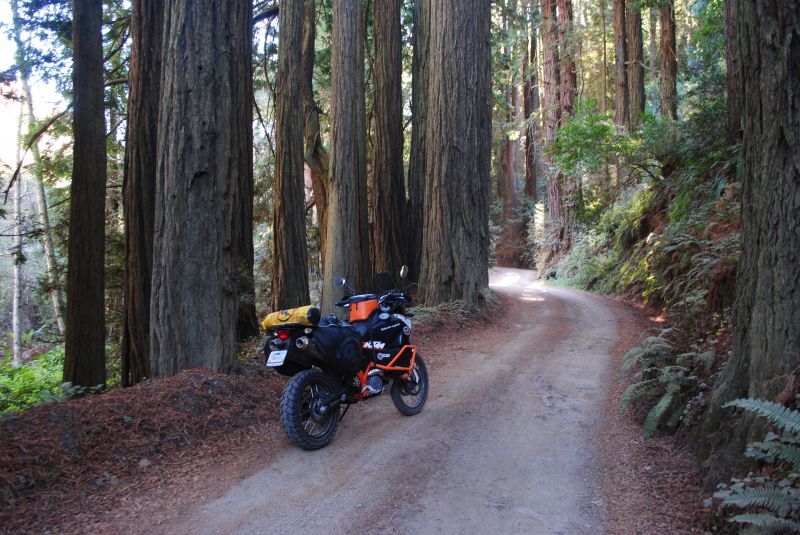 History of Highway 1; One of the most difficult routes to build along the famous highway 1 was the rugged and scenic Big Sur coast. The state first approved building Route 56, or the Carmel-San Simeon Highway, to connect Big Sur to the rest of California in 1919. Federal funds were appropriated and in 1921 voters approved additional state funds. San Quentin Prison set up three temporary prison camps to provide unskilled convict labor to help with road construction. One was set up by Little Sur River, one at Kirk Creek and a third was later established in the south at Anderson Creek. Inmates were paid 35 cents per day and had their prison sentences reduced in return. The route necessitated 33 bridges constructed, the largest of which was the Bixby Creek Bridge. Six more concrete arch bridges were built between Point Sur and Carmel.  After 18 years of construction, aided by New Deal funds during the Great Depression, the paved two-lane road was completed and opened on June 17, 1937. The road 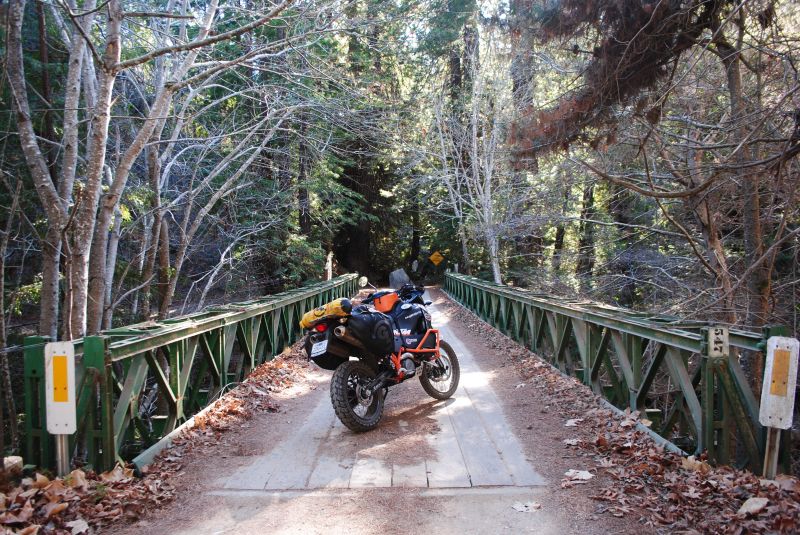 was initially called the Carmel-San Simeon Highway (Route 56), but was better known as the Roosevelt Highway, honoring the current President Franklin D. Roosevelt. A 1921 law extended Route 56 south over the county road to Cambria. Route 60, from Oxnard via the coast to San Juan Capistrano, was extended from Oxnard to El Rio (midway to Ventura, now the site of the Oxnard Boulevard interchange with US 101, in 1925. At Point Mugu, a path for the highway was cut through the mountains using surplus World War I explosives, thus creating Mugu Rock. The 1921 legislation, in theory, made Route 60 a continuous coastal loop, with both ends at what became US 101 in Oxnard and at Capistrano Beach (since 1964 the southern terminus of Highway 1 at Interstate 5 in Orange County). Route 56 was extended further south from Cambria to connect to present-day US 101 in San Luis Obispo in 1931. The route from San Simeon to Carmel (connecting with existing county highways at each end) was one of two sections designated as Highway 1. It and Route 60 were intended as links in a continuous coastal roadway from Oregon to Mexico. A large expansion of the state highway system in 1933 resulted in Route 56 being extended in both directions. To the south, a second section was 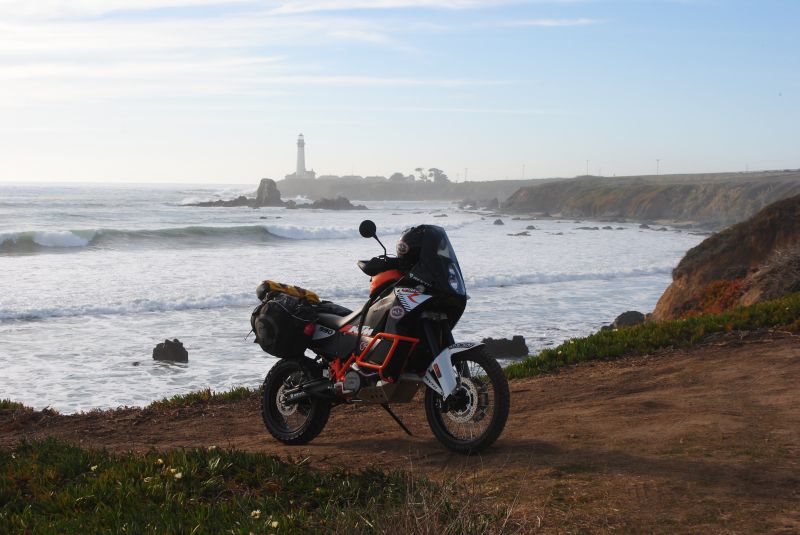 added, beginning at Pismo Beach on US 101 (Route 2) and heading south through Guadalupe and Lompoc to rejoin US 101 at a junction called Los Cruces (sic), just north of Gaviota Pass. (A short piece near Orcutt and Los Alamos had been part of Route 2, which originally followed present Highway 135 from Los Alamos to Santa Maria.) To the north, Route 56 was continued along the coast from Carmel through Santa Cruz to San Francisco. Several discontinuous pieces were added north of San Francisco, one from Route 1 (US 101) north of the Golden Gate to the county line near Valley Ford, another from the Russian River near Jenner (where the new Route 104 ended) to Westport, and a third from Ferndale to Route 1 near Fernbridge. Except for the gaps in Route 56 north of San Francisco, these additions completed the coastal highway, with other sections formed by Routes 1, 2, and The section of Highway 1 from Santa Monica to Oxnard, via Malibu, went out to contract in 1925 as "Coast Boulevard" but was designated "Theodore Roosevelt Highway" when it was dedicated in 1929. Before the completion of its present alignment in 1937, a narrow, winding, steep road known as Pedro Mountain Road 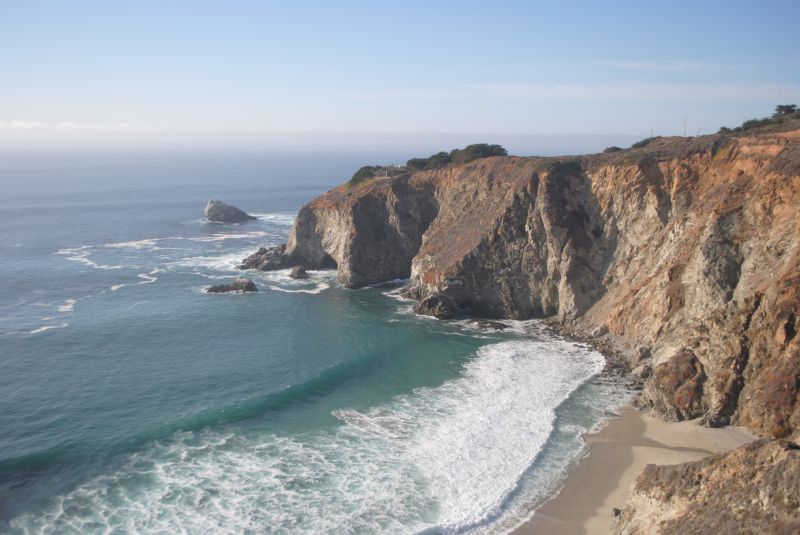 connected Montara with Pacifica. That highway was completed in 1914 and provided competition to the Ocean Shore Railroad, which operated between San Francisco and Tunitas Creek from 1907 to 1920. Highway 1 also used to run along the coast between Pacifica and Daly City but this segment was damaged and rendered unusable after a 5.3 magnitude earthquake on March 22, 1957. A small stub remains near Thornton Beach. Route 56 along Big Sur was incorporated into the state highway system and re-designated as Highway 1 in 1939. The section of road along the Big Sur Coast was declared the first State Scenic Highway in 1965, and in 1966 the first lady, Mrs. Lyndon B. Johnson, led the official designation ceremony at Bixby Creek Bridge. The route was designated as an All American Road by the US Government.