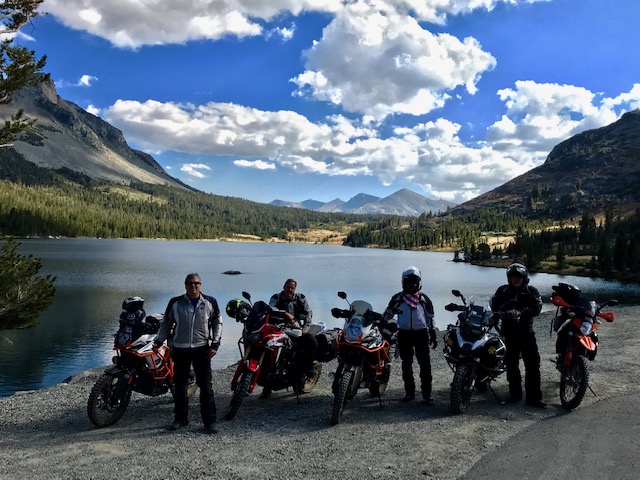 The Mammoth Adventure ride explores a fascinating landscape sculpted by fire and ice, a land where 14,000-foot summits descend to sage-filled plains, where the oldest trees on earth still stand atop wind scoured ridges, where geothermal springs bubble up through the landscape of one of the world’s largest calderas, where unique Tufa rock formations rise from an ancient alkaline lake, to a historic gold mine located at nearly 10,000 feet up the side of a majestic mountain with amazing views of the Eastern Sierra.

The Mammoth Adventure is the perfect ride for two-cylinder adventure motorcycles. You will explore an amazing combination of scenic mountain passes, awesome dirt roads and historic sites throughout the Eastern Sierra Nevada. Your adventure begins in the heart of the Mother Lode on the western side of the Sierra Nevada. You will soon leave civilization behind as you explore a series of back roads and remote forest roads through the wild and scenic Tuolumne River Canyon.

Beyond the wild and scenic canyon, you will enter the world-renowned Yosemite National Park where you will have the opportunity to ride the spectacular Tioga Pass which is the highest highway pass in California and in the Sierra Nevada. This high mountain pass provides breathtaking views of pristine lakes, granite domes and majestic mountains around every corner. “Don’t forget your camera.” 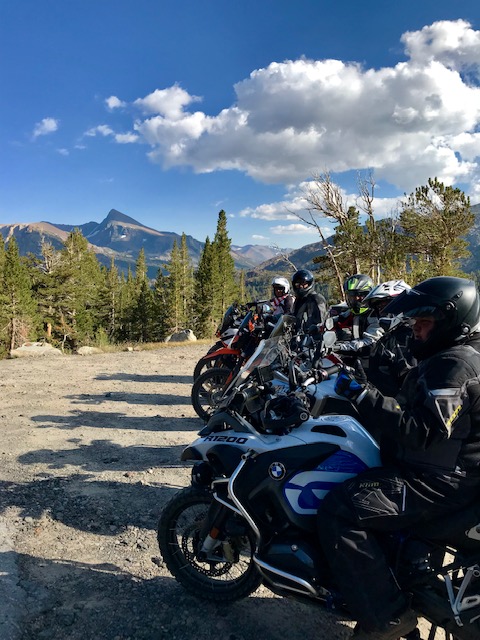 Your off-road adventure begins beyond Tioga Pass where you will explore the massive Mono Lake Basin and its ancient rock formations. The unusual rock formations that grace Mono Lake’s shores are known as Tufa Towers. These strange and dramatic rock towers form in the lake when underwater springs bubble up through the salt water and mix with rich calcium minerals in Mono Lake. The resulting reaction forms the strange limestone Tufa Towers. Over time when the water level of the lake dropped the Tufa Towers became exposed to the elements which have helped shape the Tufa rock into the strange formations we see today.

Beyond the Mono Lake Basin, you will explore the land of fire and ice known as Long Valley, which was formed by catastrophic volcanic eruptions, plate tectonics and massive glaciers that sculpted the mountains along the Eastern Sierra Nevada. Your off-road adventure will explore this unique landscape to bubbling hot springs and unique rock formations that were formed by fire and ice. Long Valley is one of earth’s largest caldera’s which is remnants of an ancient exploded and collapsed volcanic cone. The Long Valley caldera is a giant bowl-shaped depression, approximately 20 miles east-west and 11 miles north-south. The Long Valley caldera was formed roughly 760,000 years ago when a very large eruption occurred. This large eruption is considered a “super-eruption”, which released hot ash and later cooled to form the Bishop Tuff that covers the landscape between the Eastern Sierra and the White Mountain range.

The Long Valley Caldera located east of Mammoth Mountain and south of the Mono Craters is the epic center of the land of fire and ice. This massive caldera is a depression formed from the super-volcano eruption, which ejected hot ash, lava, and toxic gas. The eruption 760,000 years ago erupted 140 cubic miles of material from the super-volcano. To put this into perspective, the 1980 eruption of Mount St. Helens erupted 0.29 cubic 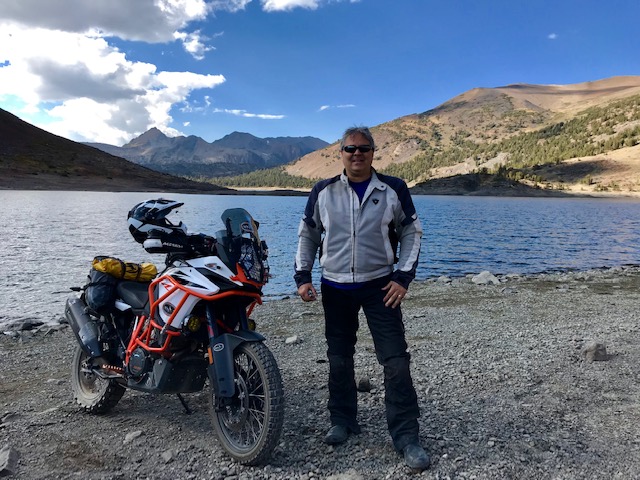 Beyond Long Valley Caldera, you will have the opportunity to explore off-road through the amazing White Mountains which are one of the largest and highest desert mountain ranges in North America. The range rises abruptly from the Owens Valley along its western escarpment, with several peaks along the crest exceeding 13,000 feet to its crown jewel rising to 14,252 feet in elevation. You will have the opportunity to explore this impressive mountain range on your motorcycle to heights over 11,000 feet in elevation to view the ancient Bristlecone Pine Forest, home to the oldest trees in the world. 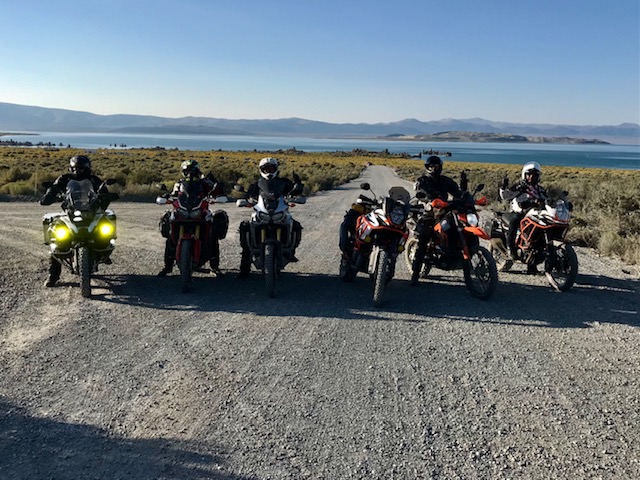 California has many superlatives including highest, lowest, deepest, biggest, tallest, largest, hottest, and more that have been scientifically measured and verified. Many of these are located in the Eastern Sierra and one of most fascinating of them all is the oldest. The Great Basin Bristlecone Pines are not just the oldest things in California or even North America, they are the oldest living non-clonal organisms on our planet! The ancient Bristlecone pines are gnarled, weather-beaten, and resilient. The oldest known Bristlecone tree in the world was discovered in 1957 by Dr. Edmund Schulman and named The Methuselah tree which is 4,789 years old.  The most recent discovery has discovered and even older Bristlecone Pine tree that is yet to be named but has been recorded to be 5,070 years old. This ancient Bristlecone Pine tree began life at about the same time humans began to develop the concept of writing. It was about 500 years old when the pyramids at Giza were built. This tree would have been about 3,000 years old when the English language began to evolve. Many of the individual trees that live in this forest are over 4,000 years old. The older ones are at least 1,000 years older than any other species on earth. These ancient trees are about 2,000 years older than the nearby Giant Sequoia, which are the world’s biggest trees. No other non-clonal species has living individuals that have seen more time on this earth than the Ancient Bristlecone Pines at over 5,000 years old.

You will have the opportunity stay two nights in Mammoth Lakes, home to the world-famous Mountain Ski area, one of the official training mountains of the U.S. Olympic Team. Mammoth Lakes with its alpine location at 7,900 feet in elevation makes for the perfect high mountain destination for summer adventure.

If you plan on trailering your bike, please make accommodations with your Hotel 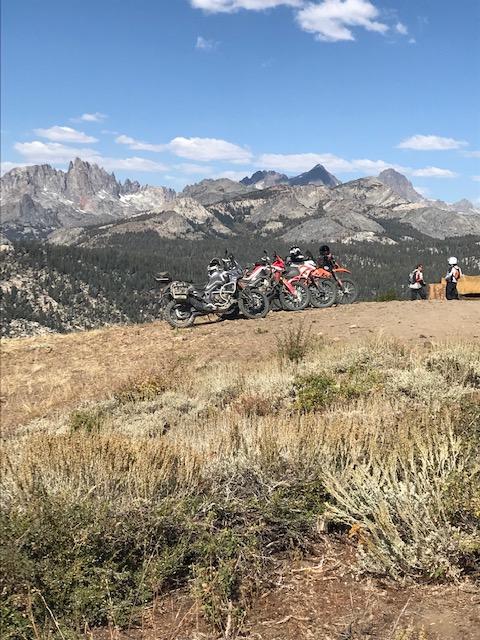 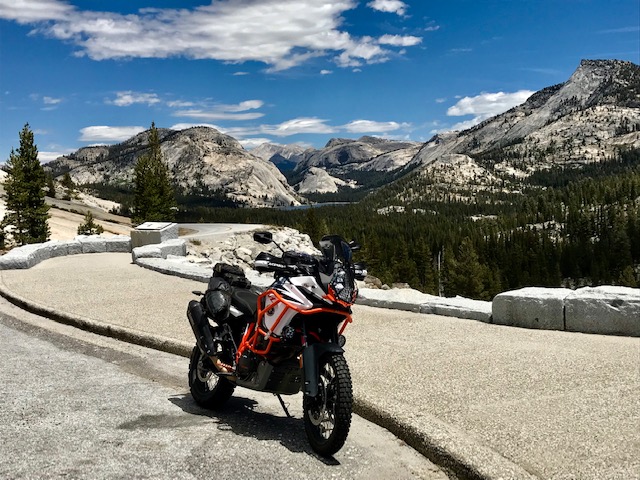