Here’s your opportunity to explore the forgotten Coulterville Yosemite Toll Road from the 1800’s. Today this scenic dirt wagon route appears much as it did back in its heyday when local prospectors gave up on mining gold in favor of mining tourism.

Your adventure begins in the historic California Gold Country, where you will explore a combination of curvy back roads and scenic dirt roads that extend beyond the horizon. You will have the opportunity to experience the best time of year to travel through the foothills on your way to Yosemite. There’s no better time of year then Spring to explore the back roads and dirt roads in the Mother Lode region. The foothills are alive with color in the Spring with beautiful wildflower blooms, cascading creeks and rolling hills of green grass.

Your adventure travels to the small town of Coulterville, where the entire town is a historic landmark consisting of 42 buildings dating back to the California Gold Rush. Coulterville was established in 1849 by George Coulter who constructed a small store to sell supplies to the prospectors in search of gold in the surrounding area. During its heyday, Coulterville was a major gold mining and supply town with 25 saloons, 10 hotels and boasting to have the “crookedest railroad in the world.” The original “Whistling Billy” locomotive now stands under the local hangman’s tree next to the museum in town. In the late 1800’s, Coulterville became a popular stop over for Yosemite bound tourists after the Coulterville Yosemite Toll Road was completed.

The historic Coulterville Yosemite Toll Road was the first wagon route into Yosemite Valley which opened in 1874 as a toll road for tourist to visit the majestic Yosemite Valley. During this time, a trip from San Francisco took several days to reach Yosemite Valley so, a stopover in Coulterville became a must stop since it was the last town on the route.

Beyond Coulterville, your off-road adventure begins as you explore the historic Coulterville Yosemite Toll Road. As you travel east, you soon leave the signs of civilization behind as you venture into the forest. Many miles beyond town you will find yourself at a small clearing in the forest just beyond a stream crossing where the tourist of the 1800’s would have their last stopover before venturing into the wilderness. At this location, stood the once famous Bower Cave Hotel which was a prime tourist stop for travelers from around the world including John Muir and Teddy Roosevelt. If you’ve ever read John Muir’s writings about his summers spent in the Sierra and the wonderful adventures he had, then you’re probably familiar with the name Bower Cave. This natural cavern was once inhabited by native American Mi-Wuk Indians, then discovered by gold miners in 1856, then rediscovered in the late 1800’s by the hotel owners and tourist on their long journey to Yosemite. The owners of the Hotel had discovered the acoustics of the cave were excellent, so they constructed a bandstand, dance floor and a wooden stairway into the cave to provide music for their guest. Bower Cave soon became a must stop for tourist during this time and became well known for its unique musical entertainment which was held inside Bower Cave.

Your off-road adventure continues as you explore beyond Bower Cave and into the wilderness were the early day tourist of the 1800’s traveled by horse and carriage to experience the majestic Yosemite Valley. You can’t help but wonder the struggles these early tourists endured as you explore deeper into the forest with every twist of the throttle. Before long you make your way up the ridge overlooking the mighty Merced River Canyon which provide long distance views of the snowcapped High Sierra. After exploring the historic Coulterville Yosemite Toll Road, you will have the opportunity to venture into Yosemite Valley where you will be rewarded with some of the most spectacular granite cliffs and waterfalls imaginable. Just around the corner your first sight of the majestic valley comes into view as Half Dome seems to suddenly jump out of nowhere. From this point it’s difficult to keep your eyes on the road due to spectacular scenery in all directions. If you’ve never been to Yosemite in April, you’re in for a treat as the waterfalls are in full glory and the thundering sounds of waterfalls echo off the granite walls. After spending some time in the valley floor visiting some of the world’s tallest waterfalls you will have the opportunity to stay the night just outside the park in the Yosemite Westgate Lodge.

Your second day adventure explores the scenic Tuolumne River Canyon on your way to Hetch Hetchy Reservoir which is hidden in Yosemite National Park’s peaceful northwest corner. Hetch Hetchy was once a spectacular glacier carved valley, with towering cliffs and waterfalls cascading onto a serene valley floor. Pioneer conservationist John Muir called it a "remarkably exact counterpart" to the now world-famous Yosemite Valley and one of earth’s most beautiful places. Due to its glacier carved U-shape, Hetch Hetchy was one of the more hospitable locations in California's rugged Sierra Nevada. Native Americans are thought to have inhabited the valley year-round. The name "Hetch Hetchy" is derived from the Mi-Wok word “hetchetci”, describing seeds from a prominent grass growing in the valley and from which a mush was made. When Yosemite National Park was created in 1890, Hetch Hetchy Valley was to be protected "in perpetuity". But in 1913, United States allowed, for the only time in our history, a single city to appropriate one of our national parks for its own exclusive use. When President Woodrow Wilson signed the Raker Act on December 19, 1913, he permitted San Francisco to build a dam in Yosemite National Park’s spectacular Hetch Hetchy Valley. Today, most of the park’s 4 million annual visitors go to the spectacular Yosemite Valley, unaware that the similar Hetch Hetchy Valley to the north even exist.

Although John Muir was unsuccessful in preventing the construction of Hetch Hetchy Reservoir, his rigorous campaign resulted in the creation of an international environmental conservation movement. As he explained to a distraught friend, “The long drawn out battle work for Nature’s gardens has not been thrown away. The conscience of the whole country has been aroused from sleep; and from outrageous evil compensating good in some form must surely come.” Muir was right. Only three years later, public outrage over the seizure of Hetch Hetchy Valley caused Congress to pass the National Park Service Act. This act ensured that our parks would be preserved and managed for the enjoyment of all Americans. So, in many ways, the desecration of Yosemite also inspired our nation’s conservation movement and no such intrusions in our parks have been allowed since.

Beyond Hetch Hetchy your adventure continues to explore deeper into the Tuolumne River Canyon on a steep twisty curvy narrow road to a small bridge crossing down stream of Hetch Hetchy. From the bottom of the canyon, the narrow road continues its twisty curvy route up the north side of the canyon to a beautiful mountain lake surrounded by coniferous forest. Beyond the beautiful mountain lake your adventure explores possibly the most remote paved road to or from Yosemite National Park.

Note: Riders have the 'option' to 'Camp" near Buck Meadow. 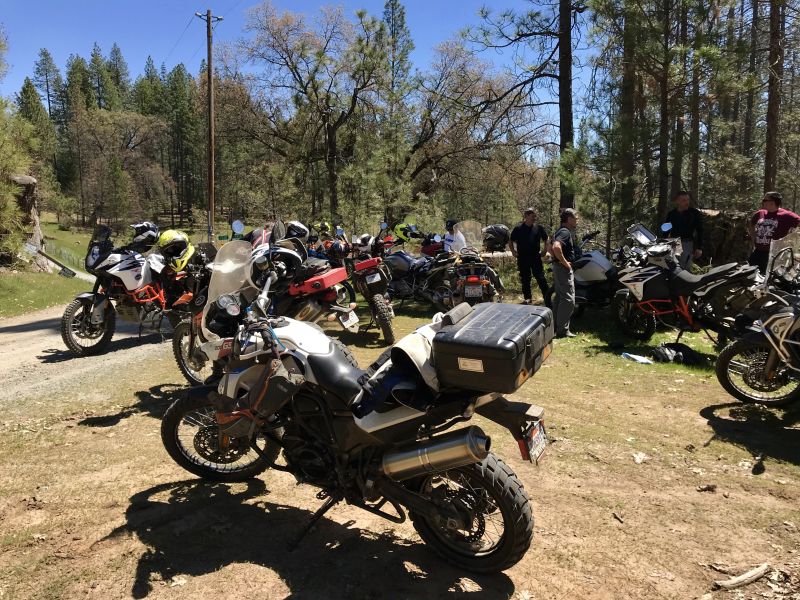 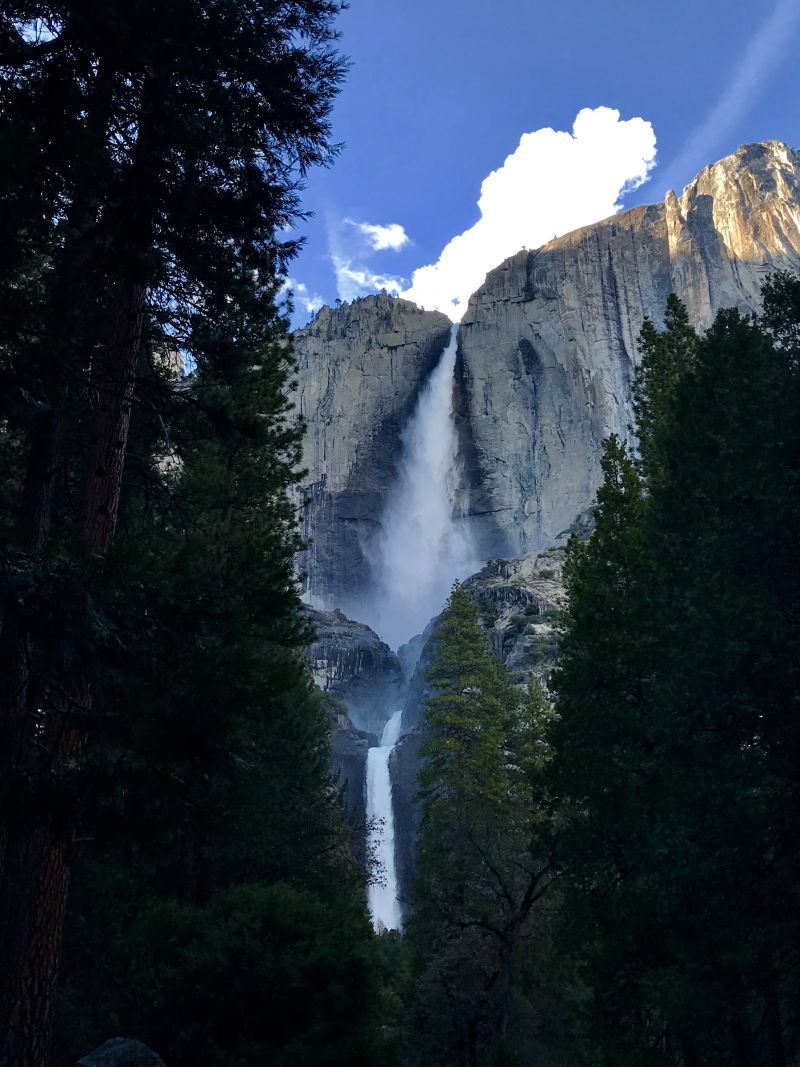 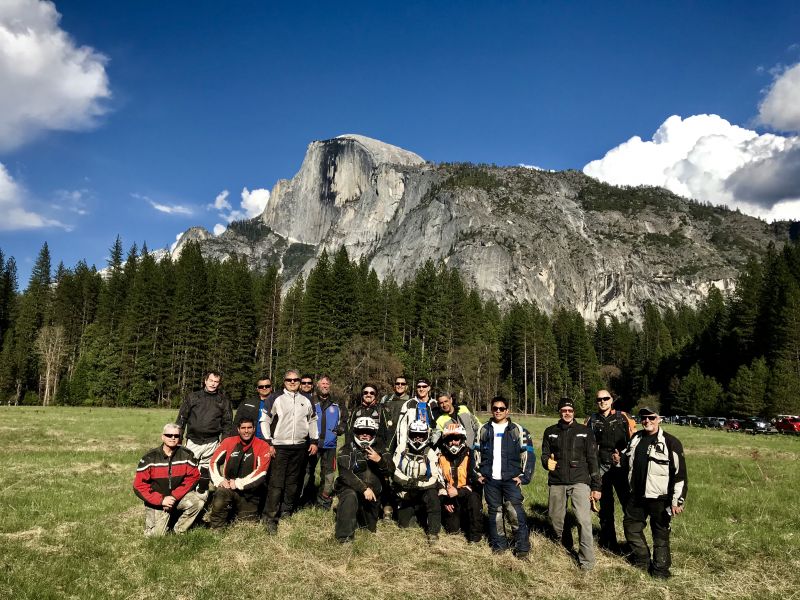 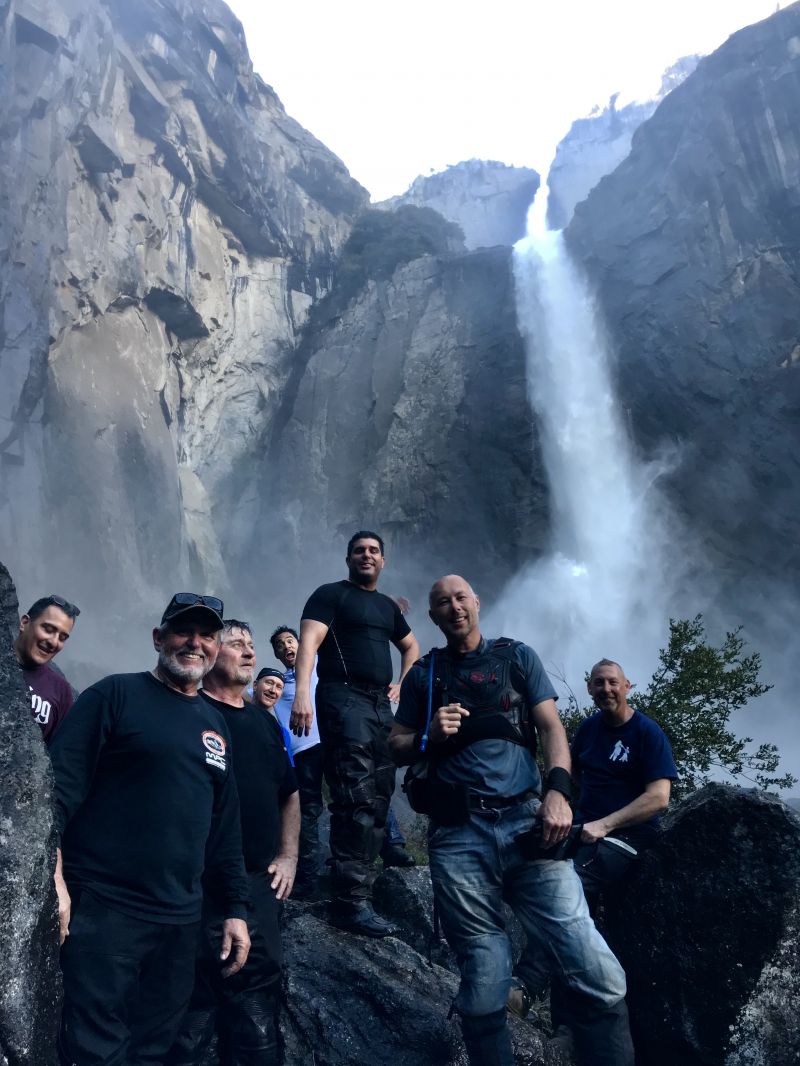 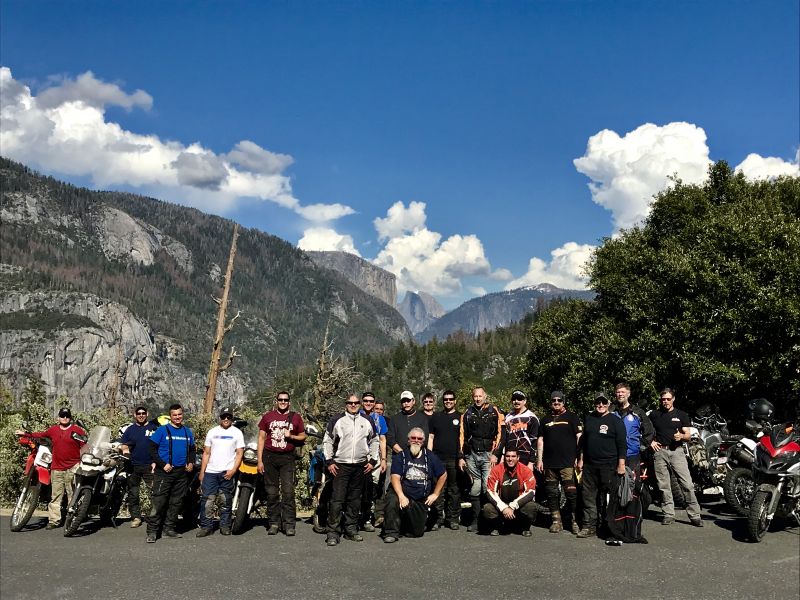 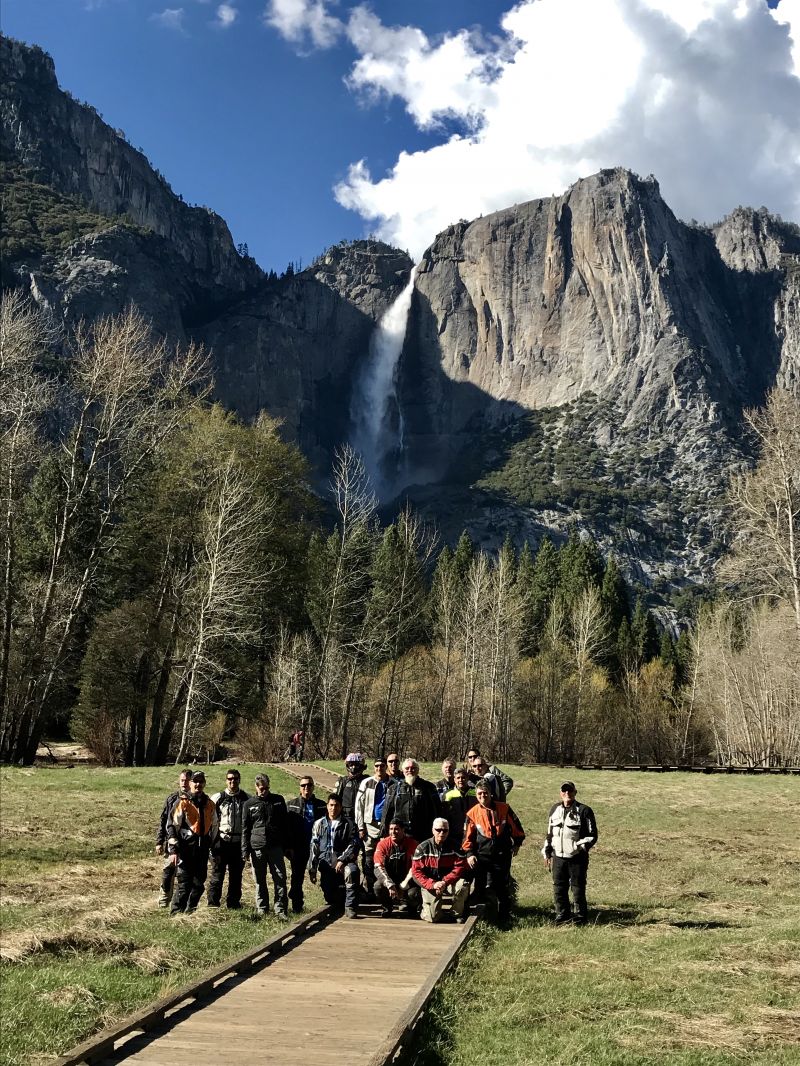 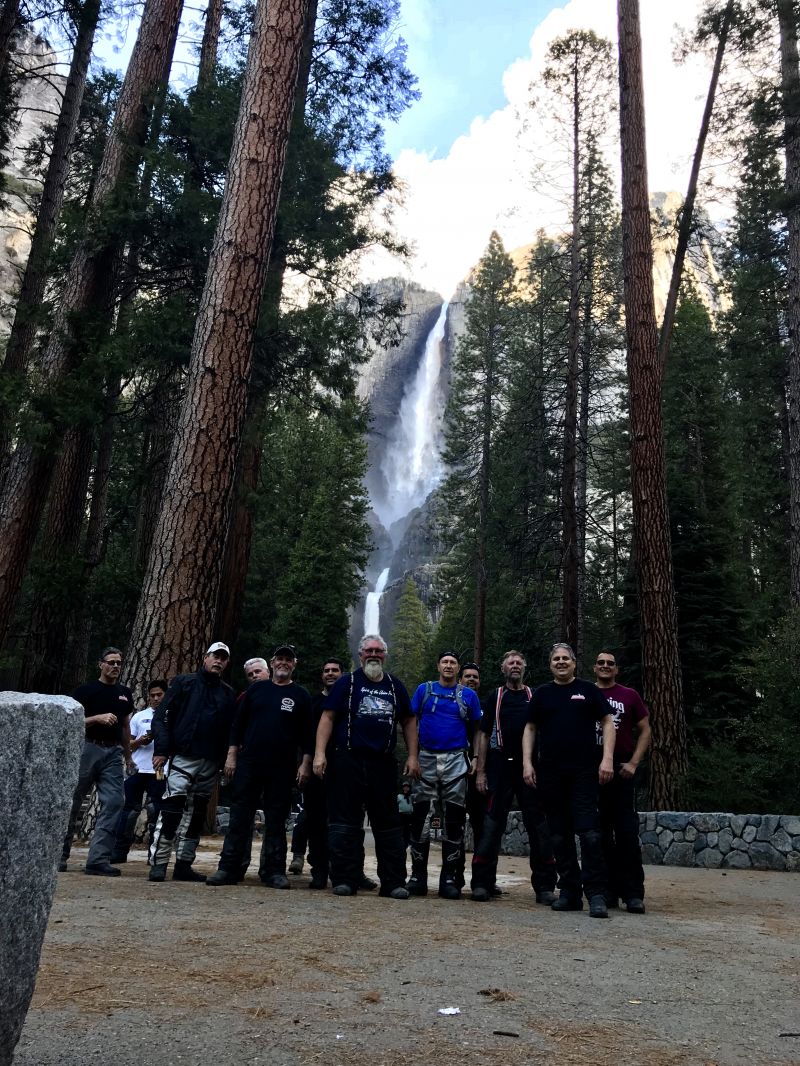 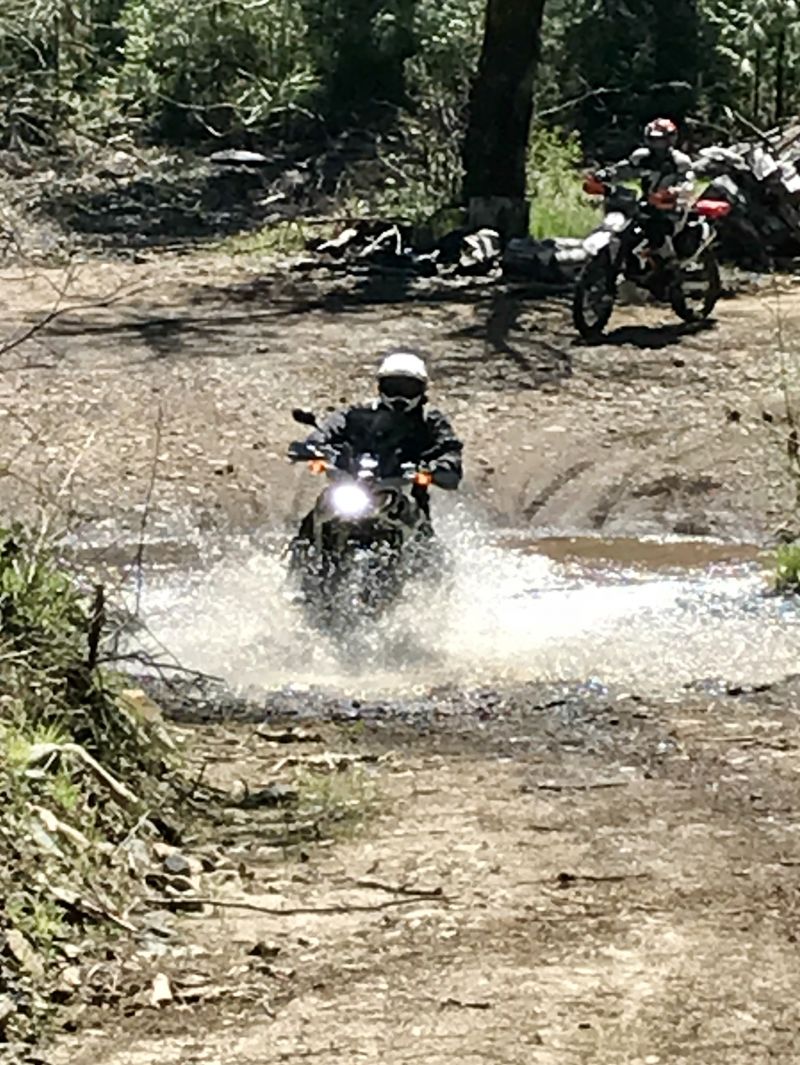