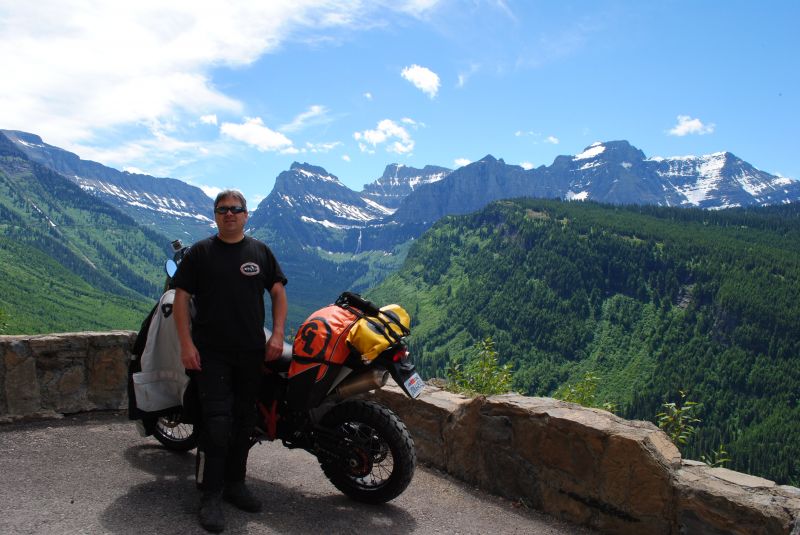 Glacier National Park is a national park located in the U.S. state of Montana, on the Canada–United States border with the Canadian provinces of Alberta and British Columbia. The park encompasses over 1,000,000 acres and includes parts of two mountain ranges (sub-ranges of the Rocky Mountains), over 130 named lakes, more than 1,000 different species of plants and hundreds of species of animals. This vast pristine ecosystem is the centerpiece of what has been referred to as the "Crown of the Continent Ecosystem", a region of protected land encompassing 16,000 square miles. Glacier National Park has almost all its original native plant and animal species. Large mammals such as the grizzly, moose and mountain goat, as well as rare or endangered species like the wolverine and Canadian lynx inhabit the park. Hundreds of species of birds, more than a dozen fish species and a few reptile and amphibian species have been documented within Glacier National Park. 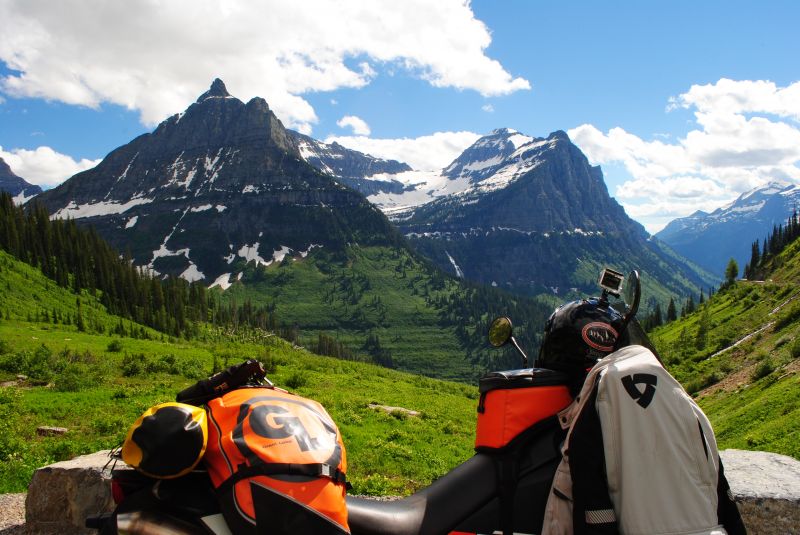 The mountains of Glacier National Park began forming 170 million years ago when ancient rocks were forced eastward up and over much younger rock strata. Known as the Lewis Overthrust, these sedimentary rocks are considered to have some of the finest fossilized examples of extremely early life found anywhere on Earth. The current shapes of the Lewis and Livingston mountain ranges and positioning and size of the lakes show the telltale evidence of massive glacial action, which carved U-shaped valleys and left behind moraines which impounded water creating lakes. Of the estimated 150 glaciers which existed in the park in the mid-19th century, only 25 active glaciers remained by 2010. 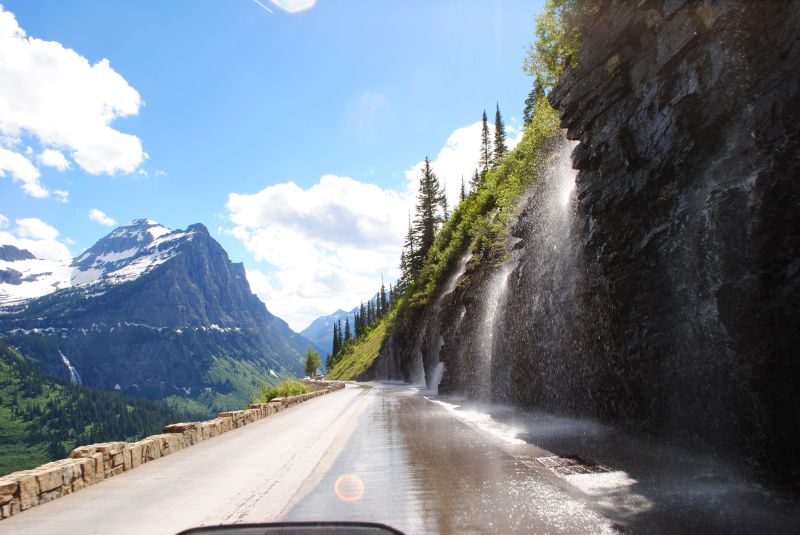 The Going to the Sun Road is the crown jewel of scenic drives in Montana, cutting through some of the most scenic and varied scenery in Glacier National Park. The Going to the Sun Road is like no other drive in Montana, skirting the sides of beautiful lakes and clinging to the sides of towering mountains. The Going to the Sun Road rewards visitors with stunning views of the Continental Divide, towering snow-covered mountains, and two of the most beautiful lakes in the United States. Going-to-the-Sun Road is the only road that crosses Glacier National Park in Montana, USA, going over the Continental Divide at Logan Pass. It was completed in 1932. A fleet of 1930s red tour buses called "jammers" which were rebuilt in 2001 to run on propane or gasoline, offer tours on the scenic road. The road, a National Historic Landmark and a Historic Civil Engineering Landmark, is an engineering marvel that spans 50 miles through the park's wild interior, winding around mountainsides and treating visitors to some of the best sights in northwest Montana. 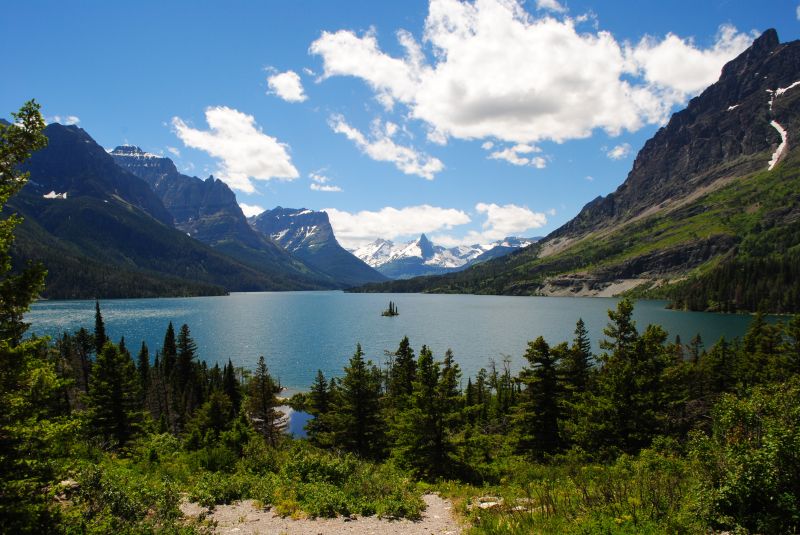 Highlights of the Going to the Sun Road include Lake McDonald and St. Mary Lake, Logan Pass, incredible views of the Garden Wall, and sweeping vistas of dozens of lofty peaks that rise steeply from the lakes and valleys far below. The road is one of the most difficult roads in North America to snowplow in the spring. Up to 80 feet of snow can lie on top of Logan Pass, and more just east of the pass where the deepest snowfield has long been referred to as Big Drift. The road takes about ten weeks to plow, even with equipment that can move 4000 tons of snow in an hour. The snowplow crew can clear as little as 500 feet of the road per day. On the east side of the continental divide, there are few guardrails due to heavy snows and the resultant late winter avalanches that have repeatedly destroyed every protective barrier ever constructed. The road is generally open from early June to mid October, with its latest-ever 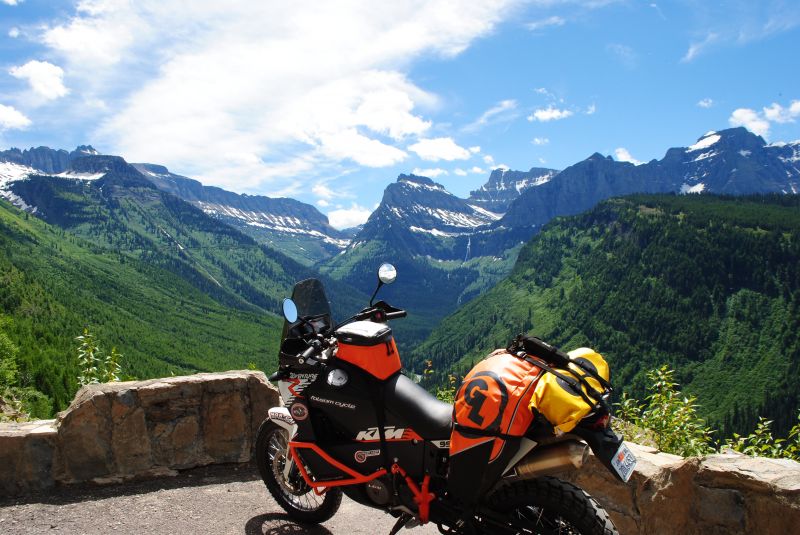 opening on July 13, 2011. The two lane Going-to-the-Sun Road is quite narrow and winding, especially west of Logan Pass. Consequently, vehicle lengths over the highest portions of the roadway are limited to 21 feet and that means no recreational vehicles or trailers in excess of this length restriction are permitted beyond two larger parking areas, each located at lower points dozens of miles below Logan Pass, on both the west and east sides of the parkway. This scenic road is shown in the opening credits of the 1980 film The Shining, as Jack Torrance's Volkswagen glides past Saint Mary Lake and up the road, underneath a small tunnel and onward, presumably going to the Overlook Hotel for his job interview as a caretaker.

June 27th 2013 SNA-Mark rode a 2010 KTM 990 Adventure a total of 1,100+ grueling miles in less than twenty-four hours starting in El Dorado Hills, California continuing on to Battle Mountain, Nevada, Twin Falls, Idaho and Missoula, Montana before ending in Kalispell, Montana while participating in the SaddleSore 1000.

The SaddleSore 1000 was conducted under very strict guidelines set forth by the Iron Butt Association. Only a handful of riders from around the world have managed to solve the challenge such a grueling ride involves.