I can't believe this trip came into fruition less than two weeks before it actually started. I mean, really, the Grand Canyon was always on my bucket list. I knew I was going there, but just not when. That's how it is sometimes, in today's busy schedule. you know you’re going there, but you just don't know when. Until you meet Mark. Then things change. Mostly in rapid succession, and sometimes all too much. Just hang on, cause the bull is blazing a trail, and your along for the ride. Yeah, it's like that. No fear and all gear. We were just sitting in the Sloughhouse Inn after a 1,200 mile red bull fueled blazing run Through Death Valley, Trona, and the El Paso Mountains when Mark And the Bartender started in on me about the praises of the Grand Canyon.  I'm like "hell yeah I’m gonna go!, Didn't you guys see the Ken Burn's National Park series?!? Of course it's on my list!!" But not Now, "I've got shit to do the next few weeks!!" Well, that was the last thing I should've said. Now they were grinding on me insistently that I go NOW! I tried to change the subject but it was obvious what was going to happen in the week to come. We were going to the Grand Canyon, and we would do it in 4 days including the Grand Canyon National Park, and also Grand Canyon West, to visit the mesmerizing  Skywalk. 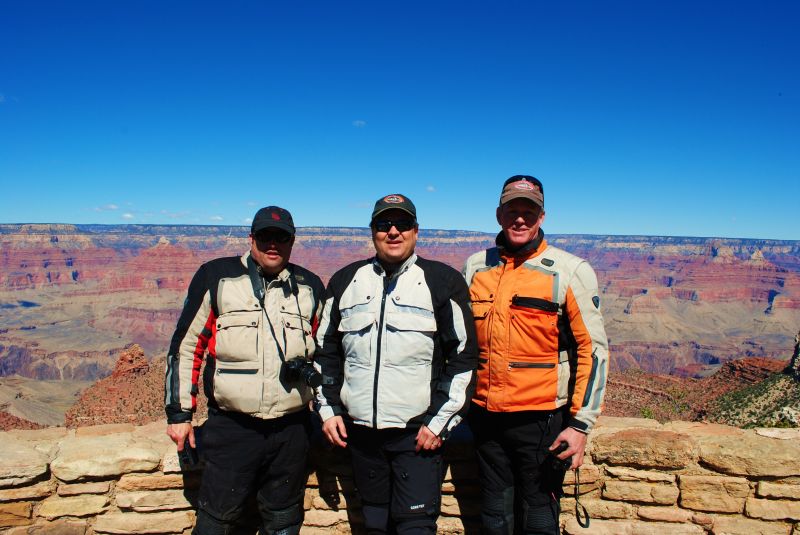 One Thousand and Eighteen Hundred miles would be the total, including two day hikes in full gear, with two nagging men. Three if you count me. Ok, so three nagging men. We’ll do a large breakfast and a large dinner and no lunch to save time on the road for photo's and hiking around. We will not take any breaks, to or from any destination other than the destination itself. (unless were filling up with gas) In other words we'll ride like bats out of hell, when were not site seeing.

We would also camp to save money, but that Idea gets thrown out of the window when it's 24 degrees with a wind chill of -2degree's. To say that it was cold is an understatement. Everything seemed logical to me, so off we went on a sunny and windy Friday morning to tackle the southbound traffic of highway 99. Which to say, is not my favorite highway. I have seen some very scary stuff on this road. The last time we were on it I noticed a semi truck getting on the freeway 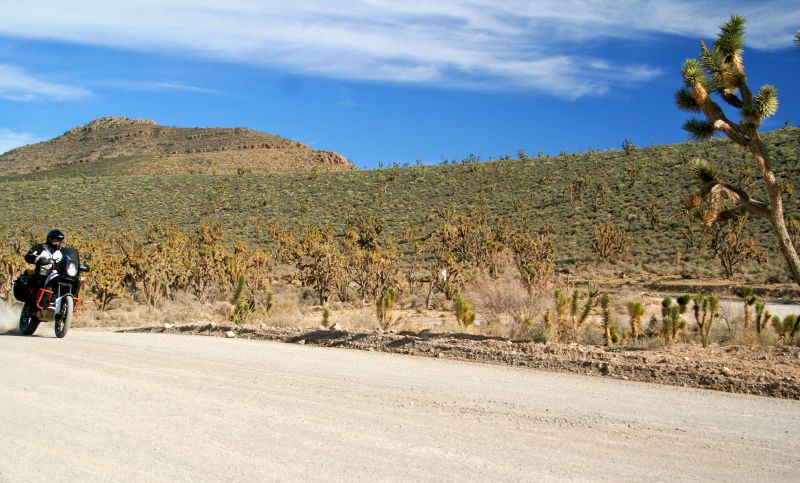 on the off ramp going the wrong way into traffic into what appeared to be a suicidal move, and a homicidal one if we were just 20 seconds earlier. Freaking crazy, right!?! But such is life without a cage. Besides the semi-traffic, this stretch went by fairly quick. A few gas stops and we were heading up Tehachapi pass, were the dessert starts to come into view, is always when I start to get excited, and a few red bulls usually helps as well because by now we've been on the road for about 6 hours and were only at the halfway point to Kingman, Arizona which will be our stop for the night after we of course head up old Route 66 to the very old mining town of Oatman. This was the original East to west route before hwy40 was built. This should still be your original route. You don't want to miss Oatman and its rich mining history, and it's old tales of Route 66. But preferably, do take this trip in the day time. But if you like adventure you'll do it after dark

when the burrows and steer are on the road. Note to oneself, Burrow's eyes do not glow in the headlights like other animals, They will come up quickly on you, and won't move one iota. Just one long creepy stare. Did I mention the curves on the mostly barrier free canyon pass?? It was so twisty, your lights never even rested on the road. Curve after curve of darkness, Burrows, and steer with huge horns not looking very happy as we come into their territory blazing by. But dam if we didn't finally make it down that mountain and finally into Kingman Arizona after a long 14 hours in the saddle. Leg one finished, over 600 miles traveled.

Leg two was the big day to the Grand Canyon, and our first push was to Williams Arizona Close to 4,000 feet higher in elevation than Kingman so it was mostly an uphill split highway, straight

and light truck traffic with automotive traffic sparse and brisk this was our chance to finally make some good time. And we did. I'm completely blown away by the power of the 990 motor in high revs at a high altitude. Just simply amazing. Thank you KTM. Thanks to you, that roughly put us at the grand canyon 'round 9:30 am, and no, you cannot have my start time, that would simply be silly. Speaking of the Grand Canyon as John Wesley Powell put it;

"The  wonders of the Grand Canyon cannot be adequately represented in symbols of speech, nor by speech itself. The resources of the graphic art are taxed beyond their powers in attempting to portray it's features. Language and illustration combined must fail" Simply put, you have to see it to believe it. But really, you actually feel it. It's that powerful. After a day of light hiking, view finding, photo & video shooting, and just simply being "stunned" we were off to Williams for the night as there will be no camping on this chilly and very windy 24 degrees night. To hell with that, I'm grabbing a steak and a shower. 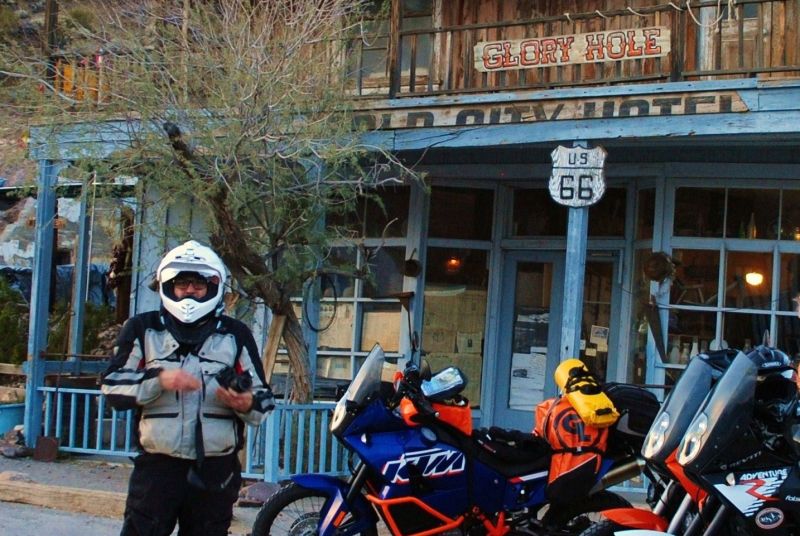 Leg three we were off to the Western Grand Canyon Experience over at the Skywalk, with was still quite a ways from Williams but closer towards the Vegas side. The dirt portion of this part was fantastic, but unfortunately will be paved soon. But man, it sure was nice to get off the tarmac for a minute.

This was no National Park, but there is no experience quite like the Skywalk experience. You have to do this at least once. Walking on a glass floor 3,000 feet above the dessert floor is something everybody should to at least once. Even if you have a fear of height's like myself. JUST DO IT!!!

Leg four was preceded by a long ride to Barstow and the you know what happens after that,…….the even longer ride back home proceeded by some very Strong north winds alllll the waaaayyyy baaaaack. To The Sloughhouse Inn of course!!!

Most people dream of adventure but few fly by the seat of their pants to experience true adventure!