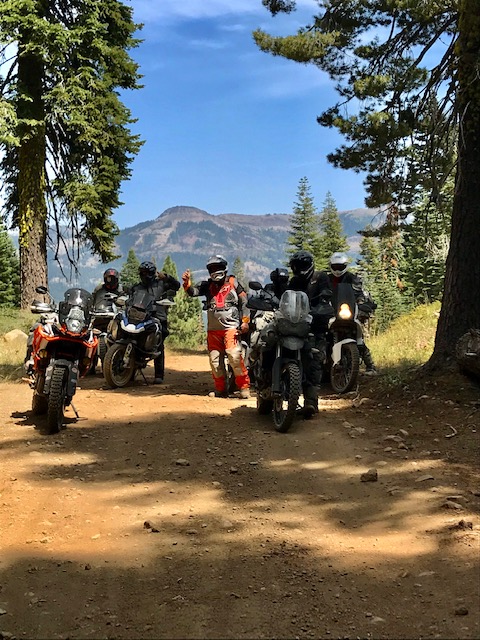 High Sierra Rally three-day ADVENTURE ride EXPLORES amazing OFF-ROAD routes through beautiful Lake Tahoe and spectacular high mountain terrain in Alpine County including the remote corners of the Sweetwater mountains located near the eastern side of the Sierra Nevada. You will have the opportunity to explore historic off-road routes discovered by some of America's most famous Mountain Men and adventurous exploration of the 1800s. During the early 1800s and before the California Gold Rush it was the era of the legendary American Mountain Men who risk their lives to explore the Wild West. The earliest explorers through this mountain region included Jedediah Smith, Joseph Walker, John C. Fremont, and Kit Carson.

Day one of your adventure ride begins in Folsom where you will travel southeast on curvy back roads through the historical gold country, then before long you will venture into the forest for an off-road adventure on the divide between the Mokelumne River and Stanislaus River canyons to beautiful Bear Valley in Alpine County. Beyond Bear Valley, your adventure travels an amazing twisty curvy mountain pass that was first explored by the legendary Jedediah Strong Smith in1827. You will also explore an amazing off-road route to visit two spectacular high mountain lakes at 8,600 ft. elevation with a panoramic view of mountain peaks in all directions.

Jedediah Smith opened the way to California for Americans. He was the first white man to cross the Sierra Nevada Mountains near present-day Ebbetts Pass, and the first European American to explore in California. No other individual had seen so much of California as Jedediah Smith. What he discovered was shared with other Americans through his letters and journals and eventually, more accurate maps could be made of the West. 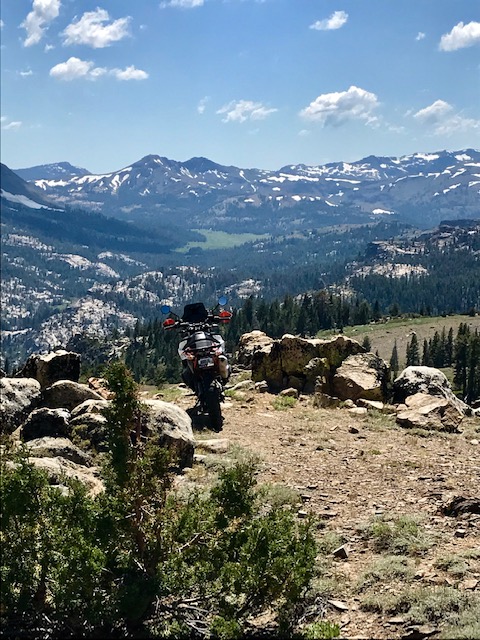 Jedediah Smith’s great Southwest Expedition of 1826-28 brought him to California. He started from Bear Lake, Utah, near the Great Salt Lake, with 16 companions. They followed the rivers south across the desert land of Utah and Nevada, to where the Colorado River forms the border of present-day California. After some help from the Indians in the Mohave villages there, Smith headed across the Mohave Desert. This was the hardest part of the trip, in spite of the fact that they followed Indian trails and had two Mohave guides. It was near the end of November when the party finally left the desert. They crossed the San Bernardino Mountains at a place near present-day Cajon Pass and went down into the green of the Los Angeles basin. At Mission San Gabriel they were welcomed by Father José Sanchez. They stayed at the mission for several months. The Mexican governor, José María Echeandía, became suspicious of Smith. He ordered him to report to San Diego, then told him to leave California immediately. Smith, however, had other plans. He wanted to explore California. He and his men went back across the San Bernardino Mountains, but then headed north into the great Central Valley, the first Americans to see this valley. They made their way as far north as the American River near present-day Sacramento, trapping beaver and charting the rivers and mountains. Now Smith left most of his men and all their beaver furs at a camp on the San Joaquin River. Smith and two partners searched for a way through the Sierra Nevada back to Utah. Following the Stanislaus River, they found a pass (now Ebbets Pass) near Lake Tahoe. The trip back took six weeks, some of it through deep snow, some through burning desert sand. It was July 1827 when they reached Utah. Having blazed the trail across the Sierra Nevada, Smith now returned to California by the southern route that he had used in 1826. With him were 18 trappers, but ten of them (and all their horses) were killed by Indians before the group reached California. When Smith got back to the camp where he had left his first group and the furs, he was seized by Mexican officials. Governor Echeandía held Smith in jail in Monterey for over a month. Then he again ordered Smith to leave California. Smith and his men sold all their furs to an American trading ship in San Francisco. They bought horses and left the San 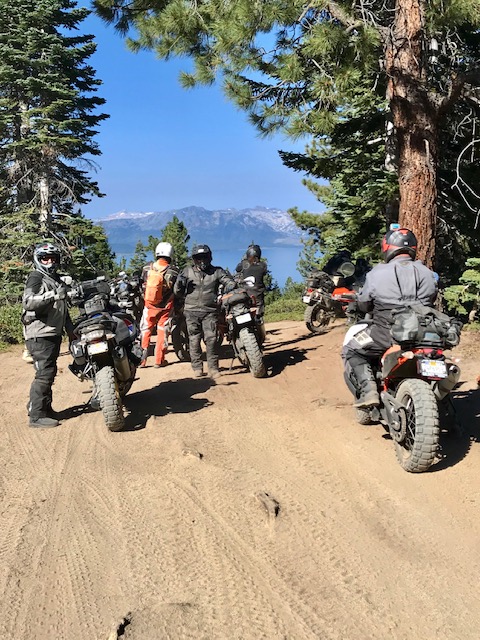 Francisco area in November 1827, driving a herd of 300 horses and mules north. Now Smith trapped and explored along the Sacramento and Trinity rivers. Eventually, he reached the Oregon coast.  Smith retired from trapping in 1830. He sold his business and decided to be a supplier for wagon trains heading west on the Santa Fe Trail. He thought this would be less dangerous work. On May 27, 1831, Smith was scouting for water along that trail when he was killed in an exchange of gunfire with a small group of Comanche. He was 32 years old. Smith River in northwestern California is named for the explorer, as is Jedediah Smith State Park in the California redwoods.

Day two of your adventure ride begins in the small mountain town of Topaz which is located on the edge of the Eastern Sierra. A short distance beyond Topaz your off-road adventure begins as you explore an amazing off-road route through the remote corners of the Sweetwater Mountains. The Sweetwater Mountains are a small mountain range in northern Mono County, California, and western Lyon County, Nevada between the West Walker River and the East Walker River. During the 1860s prospectors were drawn to the rugged and remote Sweetwater Mountains when gold and silver were discovered. After the discovery of gold and silver, miners explored the area and found promising mining locations, and soon after a dozen mining towns sprung in the Sweetwater Mountains which included Belfort, Monte Cristo, Star City, and the largest and longest lasting town, Clinton, Sweetwater, at the eastern base of the range, was the major supply center in the area. In the 1860s it was a station stop on the Carson to Aurora stage. The small town of fifty soles had a store that served local miners and a post office opened on January 26, 1870. A post office was opened in Clinton on April 13, 1882, to serve the smaller Mt. Patterson mining towns. Star City was one of the earliest locations miners were active in the 1860s. Mining was limited until 1878 when J.H. Patterson and Anthony Hiatt located a silver and gold outcropping. Their strike became the Thoroughbrace Mine, the largest in the area. The mine consisted of three tunnels at 75′ and 150′ with the deepest shaft at a 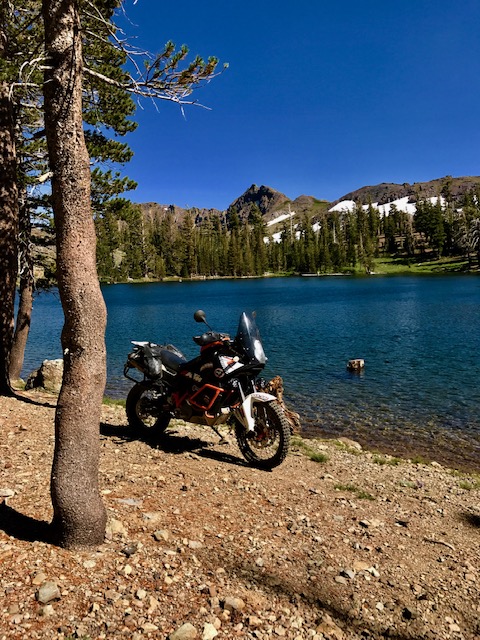 depth of 260′ and 500′ in length. Other mines in the area included Rattlesnake and Lucky Lady. A road continuing up Mt. Patterson from Star City was constructed in the late 1870s. Miners were busy searching for the next big strike and didn’t have the time or energy to construct a home. As in many mining towns Star City was first a tent city where miners lived in small canvas structures. In the 1880s a few wood structures were built, the largest a boarding house. Around this time, Belfort and Boulder Flat were established, 1700′ up the Mt. Patterson Road above Star City at an elevation of 10,200′. Mining was productive enough that the Patterson Mining District was formed in the 1880s. The most active years of the district were between 1882 and 1883 with a total value produced between 1880 and 1884 $500,000, which is nearly $15M in 2022 value.

Day three of your adventure ride begins in Topaz and before long your off-road adventure begins on a historic mining route located on the northeastern edge of the scenic Alpine County. This remote mining route explores past an abandoned open-pit sulfur mine located high on the eastern slope of the Sierra Nevada. This unique open-pit mine began in the 1860s by the Comstock Lode miners and continued on and off until the early 1960s. Between 1863 and 1870, 500 tons of copper sulfate were removed from two horizontal mines which were used for silver ore refining in the Virginia City mining area. Beyond the open-pit mine, your adventure travels part of the historical route explored by Jedediah Smith in the late-spring of 1827 when leaving California at the end of his first exploratory journey, which was the first crossing ever of the Sierra Nevada by a non-native American. Smith first traveled up and over the mountains in the area now known as Ebbetts Pass, then continued over the current day Monitor Pass area and then onto Topaz Lake before continuing on across the Nevada territory. Beyond Jedediah’s historical route, your adventure continues along the western shore of beautiful Lake Tahoe. This scenic byway provides impressive views of Lake Tahoe, known by the native Washoe Indians as “Big Water”. As you travel along the western shore you will see why the Washoe 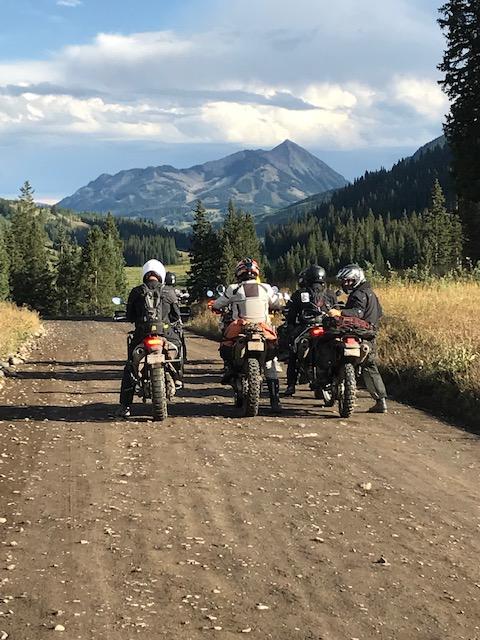 Indians appropriately named Tahoe as Big Water. Your adventure continues past Tahoe’s north shore to the small mountain town of Truckee, where you will stop for a tasty lunch at a local restaurant. After lunch, you will have the opportunity to travel the historic Donner Pass road past the historic Donner Camp. The historic pioneer site known as Donner Camp is the location where the members of the ill-fated Donner Party were trapped by weather during the winter of 1846 and 1847. Caught without shelter or adequate supplies, members of the group resorted to cannibalism to survive. The Sierra Nevada site has been designated a National Historic Landmark. Beyond Donner Camp, your adventure travels over the historic Donner Pass to a scenic overlook that provides a panoramic view of Donner Lake and the surrounding Sierra Nevada Mountains. From this scenic overlook, you will also see the abandoned Donner Summit Tunnels. These historic Donner Summit Tunnels were carved out of solid Sierra granite to create the first transcontinental railroad where the first pioneer wagon train crossed the Sierra Nevada into California. The majestic mountain located to the south side of the Donner Summit Tunnels is named after the man with a dream. Theodore Judah was a man with a dream, and his dream was to build a railroad over and through the Sierra Nevada Mountains. In the mid-19th century, the civil engineer surveyed a large stretch of the Sierra route to be used and found funds to make the Transcontinental railroad a reality. A key part of this route lies at the historic Donner Pass. At the summit lies a series of abandoned tunnels that were completed in August 1867, and the first train passed through the historic tunnel in 1868. Unfortunately, Judah did not live long enough to see his dream come true; Judah died in 1863 during an eastbound adventure during a quest to build his dream project.

Continuing on, your off-road adventure begins a short distance beyond Donner Pass where you will explore a historical wagon route that was traveled by pioneers during the California Gold Rush. This historical wagon route remains much intact as it looked to the early pioneers that traveled up and over this vast stretch of mountain wilderness. You will have the opportunity to venture into this vast mountain wilderness, past old-growth pines, and groves of aspen trees, and you will be stunned by the breathtaking views of the Royal Gorge including a panoramic view of the high Sierra Peaks on your adventure.

Off-road terrain is rated "mild to moderate" and “challenging” and lots of adventure.

Riders are responsible to book their hotel reservations. 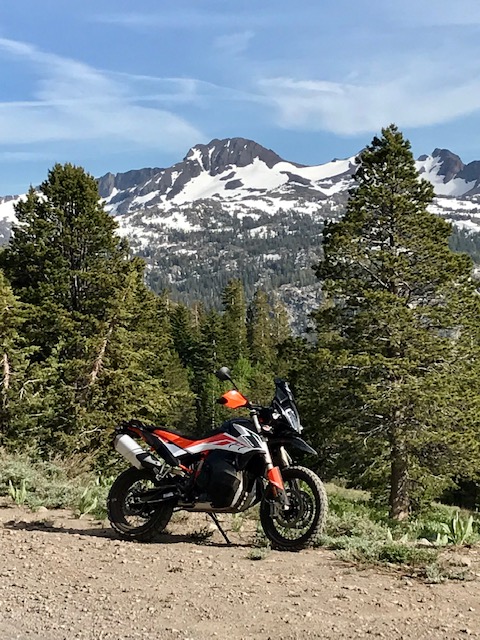 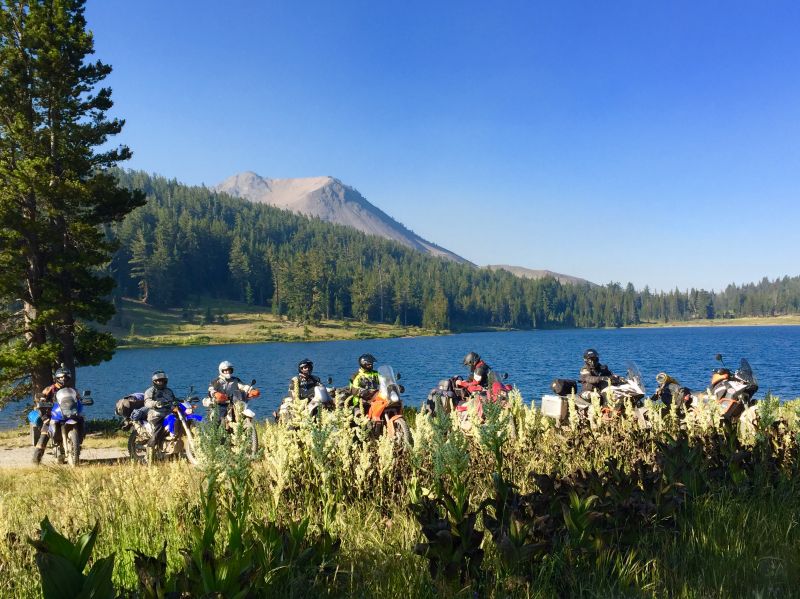 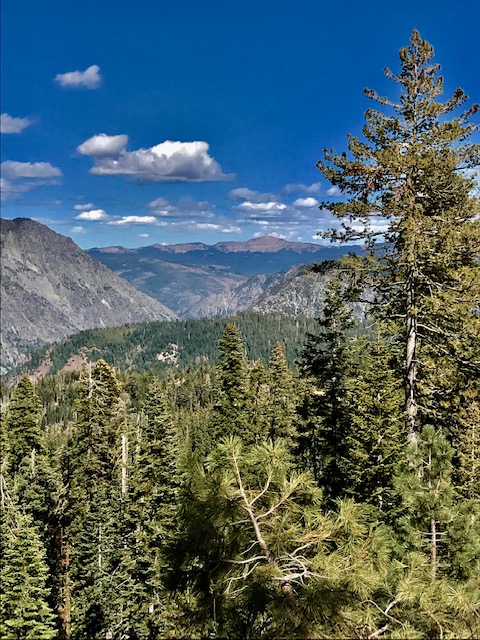 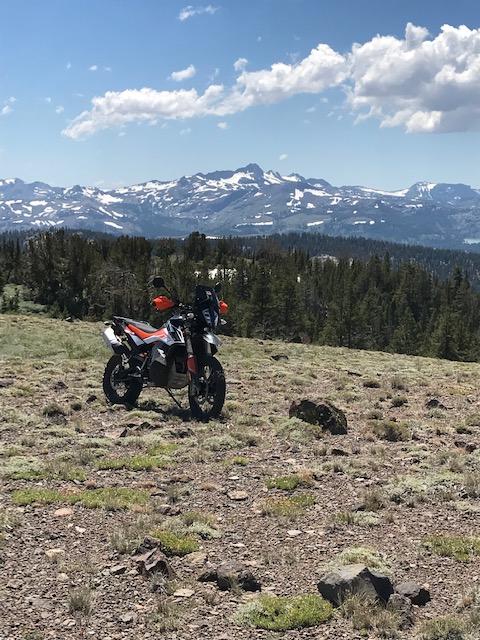