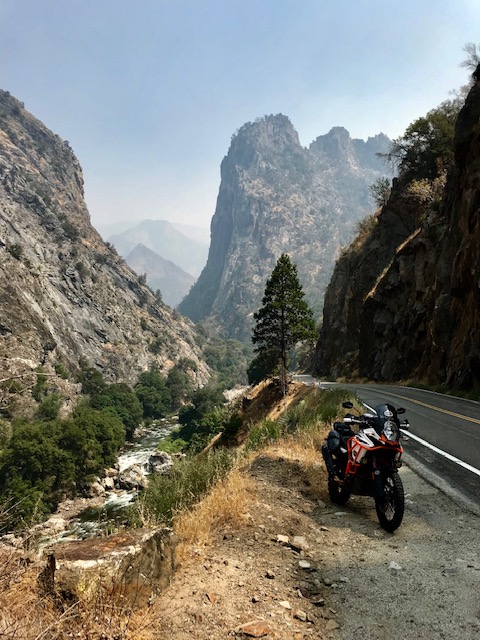 Here is your opportunity to EXPLORE an amazing OFF-ROAD route through the land of GIANT TREES and DEEP CANYONS, known as Sequoia and Kings Canyon National Park.  This is the perfect adventure ride for dual-sport adventure motorcycles which provide the perfect combination of twisty scenic canyon roads and amazing off-road ADVENTURE! 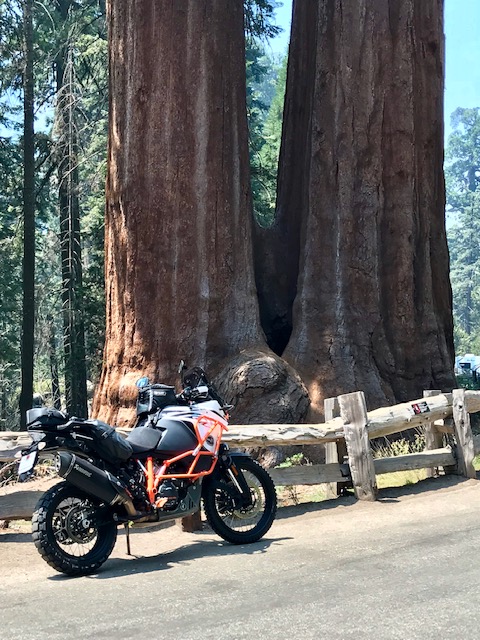 This remote meadow marks the endpoint of Minaret Road which was once planned to be a Trans-Sierra Highway. Minaret Road was once a grand idea by early-day road builders to construct a mountain pass from the San Joaquin Valley to the Eastern Sierra. The road builders' dream was to create a scenic byway through coniferous forest on the western slope and traverse over rugged granite peaks and beyond to the Eastern Escarpment via the Minaret Summit, which offers spectacular panoramic views of the jagged Minarets. Minaret Road construction began on both sides of the Sierra Nevada with hopes to connect this scenic byway in a remote location west of Reds Meadow. After many years of hard work and perseverance, their dream of constructing a scenic mountain pass came to an abrupt end with less than 10 miles left to connect this scenic byway. 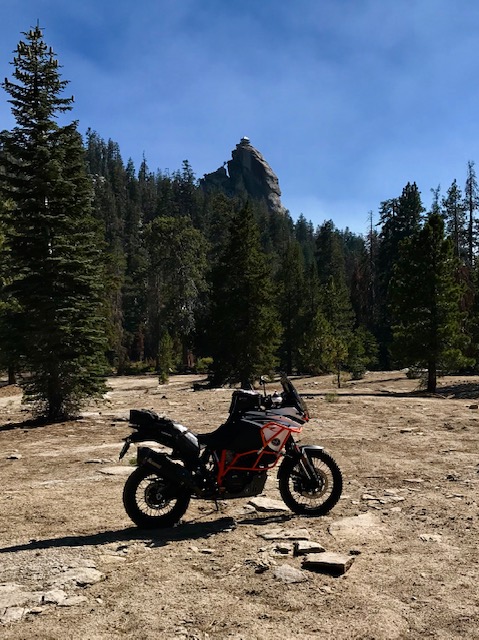 While Governor of California, Ronald Reagan made a horse packing trip into the now designated Ansel Adams Wilderness. After his wilderness adventure, Reagan supported the conservationists' efforts to prevent the completion of the Minaret Road. Reagan continued his efforts after being elected President in 1980 and the area was eventually designated wilderness by the California Wilderness Act of 1984. The Sierra Nevada escarpment is now a continuous Wilderness from Ball Mountain (near Inyokern) to Tioga Pass, a distance of over 150 miles of wilderness. 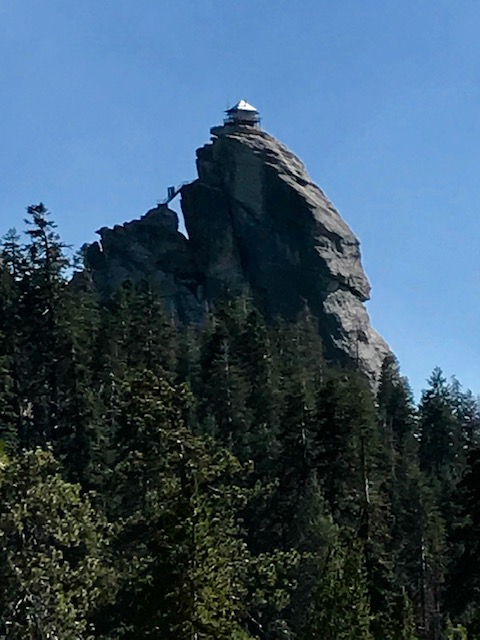 Day two of your adventure travels south on curvy back roads to the land of giants and deep canyons, known as Sequoia and Kings Canyon National Park.  Your adventure descends down a curvy twisty road to the depth of Kings Canyon, The Kings Canyon Scenic Byway is the most unique section of the park, and also one of America’s most remarkable drives and a must-do motorcycle ride. The 50-mile mountain pass winds down 2,700 feet, past some incredible mountain views, and into a vibrant valley where the Kings River flows. The mighty Kings Canyon reaches a maximum depth of 8,200 feet when measured from Spanish Peak down to the confluence of the Middle and South Forks of the Kings River. That's over 2,000 feet deeper than Arizona's Grand Canyon! 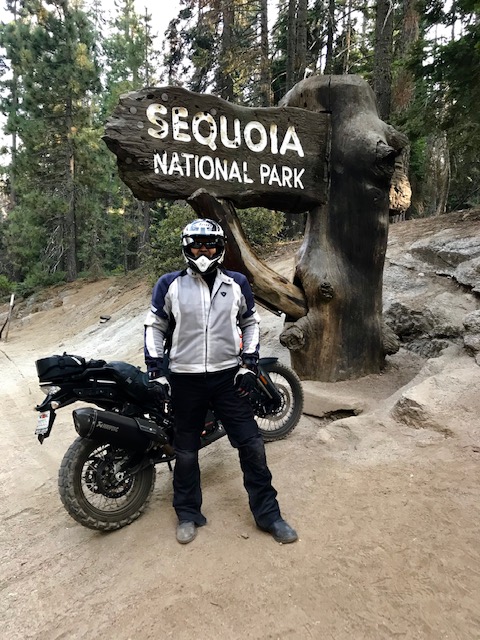 After exploring the mighty Kings Canyon, your adventure retraces the scenic byway from the depth of the canyon to explore an off-road route to one of the most unique and scenic fire lookout towers within the Sierra Nevada range.  This hidden fire lookout tower sits perched atop a huge granite dome within the Sequoia National Forest and Kings Canyon National Park.  You will have the opportunity to climb a unique staircase up the side of the granite rock to the fire lookout tower on top of the massive granite dome and be rewarded with panoramic views of peaks over 14,000 feet along the Sierra Crest.  After visiting the fire lookout tower your off-road adventure continues through the forest eventually connecting to Sequoia National Park scenic byway.  Your adventure continues south through the land of Giants, home to the largest tree in the world.  Beyond the Giants, your adventure descends down a series of switch-backs into Kaweah River Canyon to the small town of Three Rivers for your second-night stay. 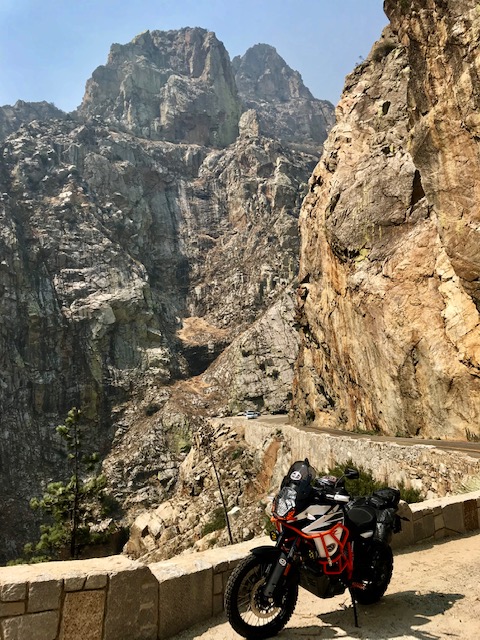 Day three of your adventure travels up the Kaweah River Canyon on a series of switch-backs into the land of Giants.  Continuing on your adventure brings you to the famous General Sherman Tree which is the largest tree in the world.  You will have the opportunity to walk within the land of the giants to the base of the massive General Sherman Sequoia Tree.  The General Sherman Tree is the world's largest tree, measured by volume. It stands 275 feet tall and is over 36 feet in diameter at the base. Sequoia trunks remain wide high up. Sixty feet above the base, the Sherman Tree is 17.5 feet in diameter. Giant sequoias grow only on the western slopes of the Sierra Nevada in California, between 4,500 to over 7,500 feet in elevation. Within park boundaries, park staff distinguishes approximately 40 different giant sequoia groves, ranging from one to tens of thousands of sequoia trees per grove. Numerous groves can be reached by road, while others are remote and involve an arduous hike to visit. In all the groves – from heavily visited to remote – these immense, majestic trees and sunlight filtered through lofty branches bring a sense of peace and wonder.

1. Giant Sequoias are rare trees. Giant Sequoias can only grow along a narrow, 260-mile strip on the western slope of the Sierra Nevada Mountains, between 4,500 and 7,500 feet.

3. Giant Sequoias know how to branch out.  A Giant Sequoia tree's largest branches can be up to eight feet in diameter. 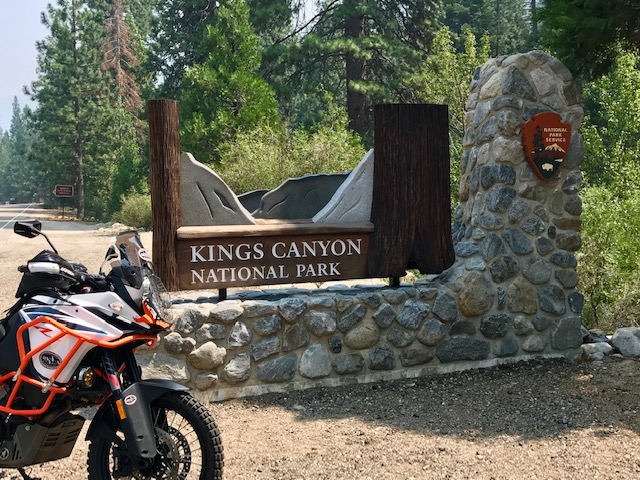 8. Giant Sequoias are some of the widest trees in the world.  The Giant Sequoia's girth is what truly makes it a giant. The General Sherman Tree in the Sierra Nevada range is 36 feet 6 inches in diameter at its base and 102 feet 6 inches in circumference with a height of 274 feet 9 inches.

9. Giant Sequoias really know how to fill up a room. The world's largest tree by volume, General Sherman, is a Giant Sequoia boasting a total volume of more than 52,000 cubic feet.

14. Giant Sequoias have single-child households. In order to sustain the species, a Giant Sequoia needs to produce only one offspring over its entire lifespan.

15. Giant Sequoias aren't quick to reproduce. The Giant Sequoia only reproduces every 20 years. Forest fires are required to open its cones.

After your visit at the General Sherman tree, your adventure continues north back towards Jamestown on a combination of curvy back-roads and twisty canyon roads including a must-ride curvy section of road in the Merced River Canyon known by a local motorcyclist as the Little Dragon. 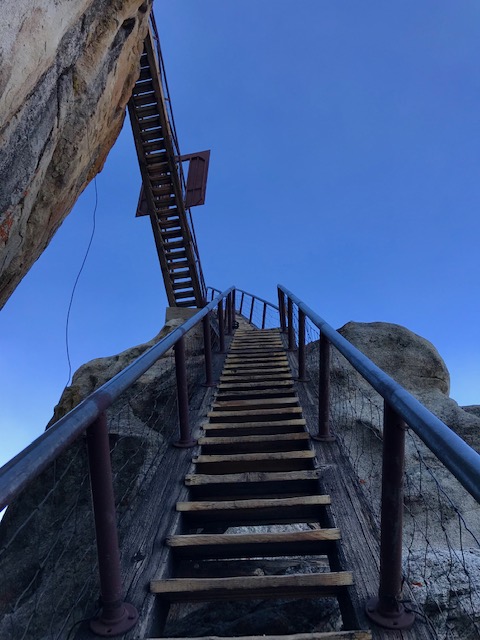 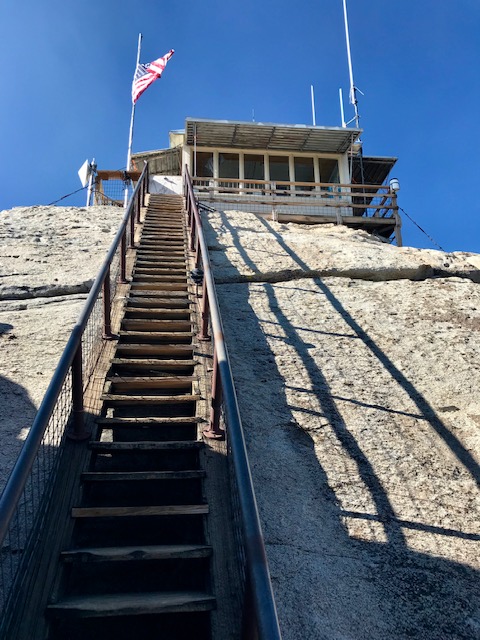