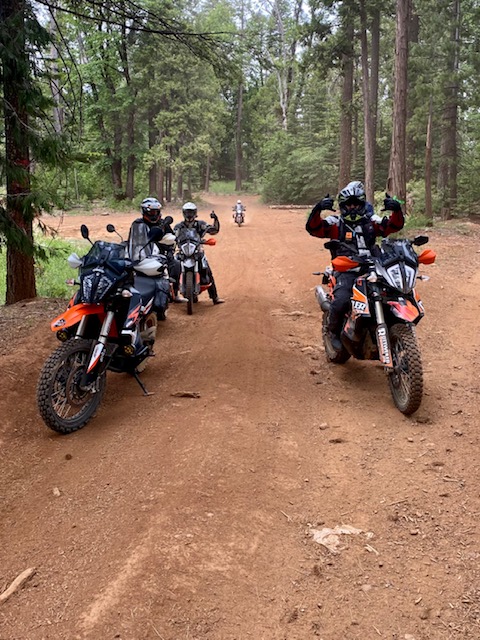 Bear River Canyon ADVENTURE ride EXPLORES an adventurous OFF-ROAD pioneer wagon route through the wild and scenic Bear River Canyon to visit an abandoned hydraulic mining site in the middle of nowhere including a fascinating mining town that was founded by German immigrants during the California Gold Rush.

Your journey begins on the western edge of the foothills in the gold rush town of Folsom which was once a bustling town full of gold-seekers. From Folsom, your journey travels northeast through the American River area on an exciting back road route through the gold country. The first gold-seekers, known as 49ers, rushed to sites along the American River where boomtowns sprang to life such as Folsom and Coloma including mining camps such as Negro Bar and Mormon Bar which were extensively placer-mined during the California Gold Rush. Before long, your exciting back road route turns into an off-road adventure as you descend deep into the American River Canyon on a dirt wagon route that was once traveled by 49ers in search of gold. 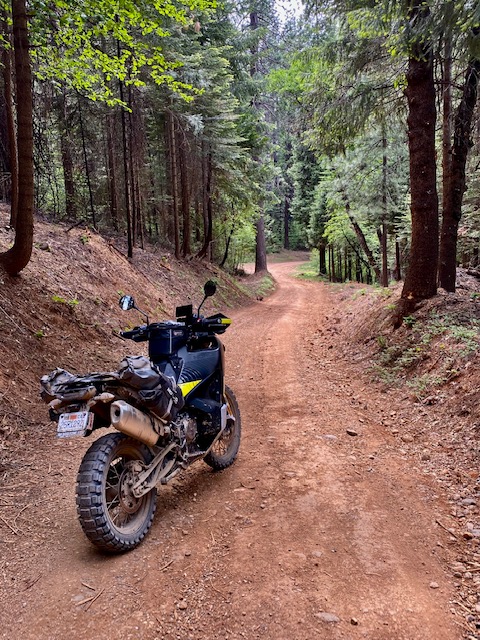 Beyond the American River Canyon, your adventure leaves civilization behind as you explore deep into the forest on an amazing off-road route to visit an abandoned hydraulic mining site in the middle of nowhere. During its heyday, this abandoned mining site and nearby diggin’s was one of the richest mining districts in Nevada County. The rich mining district of You Bet, Red Dog, Chalk Bluff, Dutch Flat, Gold Run, and Little York Diggin's was first placer-mined in the early days of the Gold Rush. The unusual name "You Bet" originated from a saloon keepers’ favorite expression on a day when a group of miners gathered in the saloon to name the new mining town. The saloon keepers’ favorite phrase was "you bet". Whenever he was asked about a proposed name, he would reply "you bet." After much drinking, the miners decided that “You Bet” sounded just right and the name stuck. The rich mining district was hydraulicked on a large scale until the 1880s, then the district continued to be mined on a moderate scale, mainly by the Chinese for many years after, 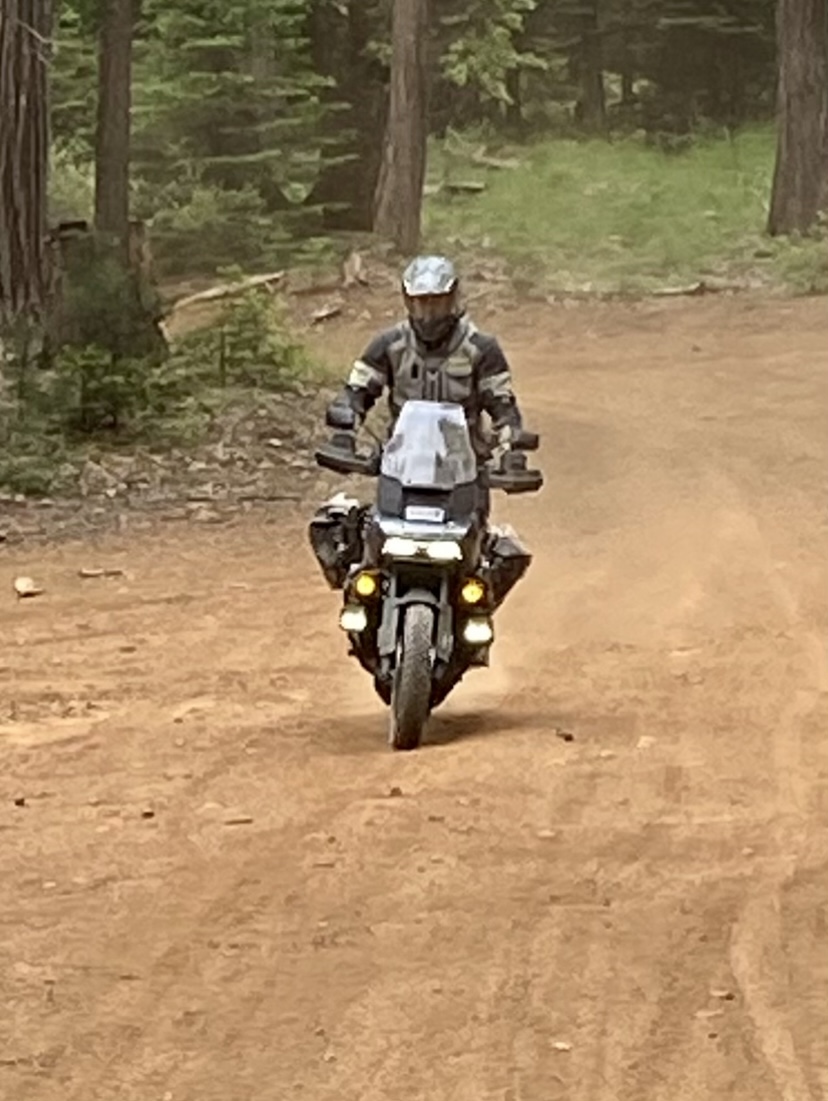 Your off-road adventure continues after visiting the historic diggin's, and ventures east on a remote dirt wagon route once traveled by pioneers and climbs past the gold-bearing cliffs, known as Chalk Bluff. The Chalk Bluff region was the scene of extensive hydraulic gold mining during the mid to late 1800s, a historic period when miners extracted millions of dollars worth of gold before hydraulic mining was outlawed in California. Hydraulic mining began on a small scale in 1852 in California but soon developed into a large-scale, sophisticated method of working great volumes of gold-bearing gravel. The basic idea was to aim high-powered jets of water through huge cannon-shaped nozzles known as monitors at the gold-bearing gravels, washing away tons upon tons of debris, after which the gold-bearing debris/sludge traveled through a deep cut or tunnel that was lined with a series of sluices to capture the gold. During roughly a 30-year period, 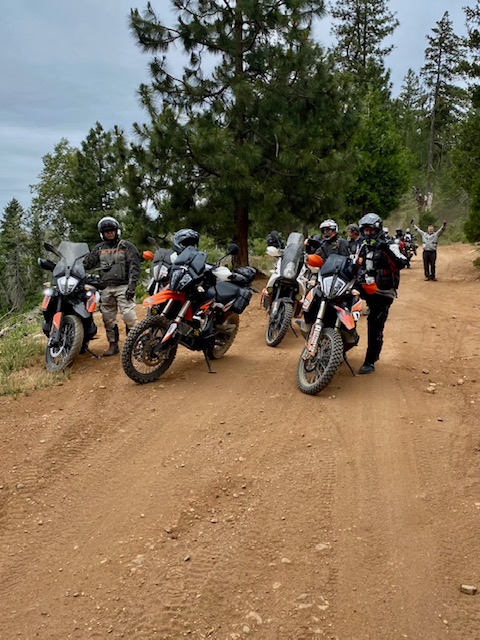 from 1855 to 1884, hydraulic miners washed away approximately 250 million cubic yards of material. This created repeated catastrophic flooding of farmlands and valuable property in the flatlands below the hydraulic operations. Eventually, a farmer in Marysville by the name of Woodruff decided to sue the North Bloomfield Gravel Mining Company to prevent further debris from being discharged into the Yuba River. That case was presided over by Judge Lorenzo Sawyer, who issued his famous "Sawyer Decision" in January of 1884, a 225-page document that with effective legal decree abolished large-scale hydraulic operations in California for all time, resulting in abandoned mining sites and ghost towns throughout the Gold Country.

Beyond the gold-bearing cliffs, your off-road adventure explores deep into the forest for an amazing journey into the heart of the wild and scenic Bear River Canyon. This remote section of wildness is home to California black bears that roam free throughout this rugged landscape, in fact you might experience a black bear sighting while exploring on this adventure ride. During 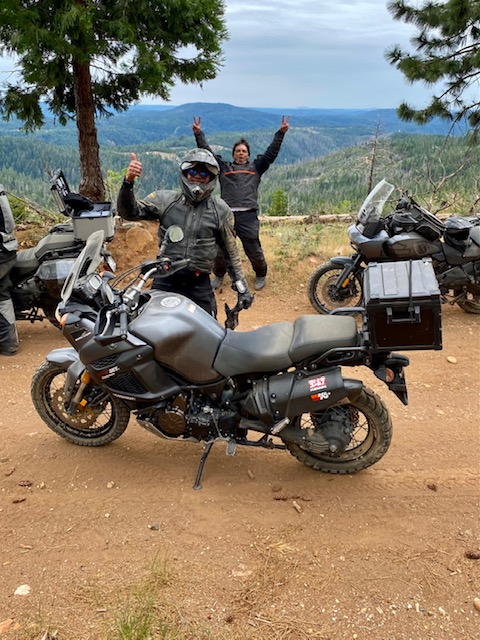 the 1800s, Grizzly Bears thrived in California and were seen as an enemy to Gold Rush pioneers and prospectors in the Bear River Canyon region. The ferocious grizzly's struck fear in pioneers and prospectors as horrifying stories of savage attacks were shared from one mining camp to the other. In response to their fear, pioneers, prospectors, settlers, farmers, and ranchers killed thousands of grizzly bears between 1849 and the early decades of the 20th century. The California grizzly bear with an estimated population of over 10,000 grizzlies officially became extinct by 1924 after the killing of the last grizzly on record. Although the feared grizzly bears are extinct in California, the black bear population is estimated to be between 30,000 and 40,000 black bears statewide. Today a large number of black bears roam free throughout the wild and scenic Bear River Canyon region which adds another level of excitement to this amazing off-road ADVENTURE! 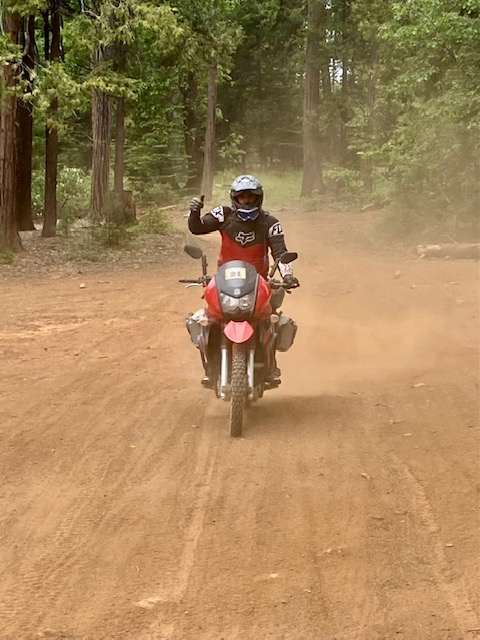 mountain community dotted with historic buildings and Victorian homes, that reveal only a few clues of its wild past during the Gold Rush days. Founded in 1851, the small mountain town of Dutch Flat quickly became a gold rush boomtown and one of the richest mining locations in the state of California. During its heyday, Dutch Flat had a thriving dramatical and debating society with a beautiful opera house. In fact, Mark Twain would often lecture at the opera house in the town that locals referred to as the “Athens of the Foothills.” The mining town of Dutch Flat was named after two German immigrants, the Joseph and Charles Dorbach brothers who settled here in 1851. The unique name of Dutch Flat derived from Charles’ nickname, “Dutch Charley Flat.” During its heyday between 1851 and 1873, the bustling mining town of Dutch Flat had a larger population than any other town in Placer County. During this period people flocked into town from around the world and at its peak, there were nearly 2,000 Chinese immigrants and 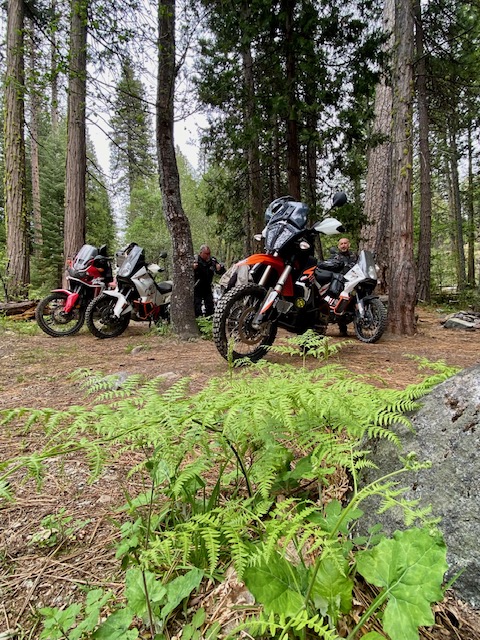 several thousand European American miners who worked the rich gold-bearing ridge above Bear River Canyon. Today the entire region is deeply scarred by the hydraulic mining of the day, which was essentially water blasting with huge cannons known as "monitors". Besides its prominence as a mining center, it was also a stage station, making it one of the largest, and most important towns in the county from about 1864 to 1866. In the fall of 1866, after the railroad had reached Cisco, 20 miles farther up the ridge, Dutch Flat lost much of its importance as a stage stop. During the 1870s, hydra-mining operations at Dutch Flat had reached its peak. In 1872, the Cedar Creek Company of London purchased as many as 32 claims and worked them on a gigantic scale. Millions in gold were taken from the placers, with one nugget alone being worth $5000. With the price of gold in those days valued at about $17 to $20 per ounce, one has an idea of its enormity. Located near the edge of town is the historic pioneer American 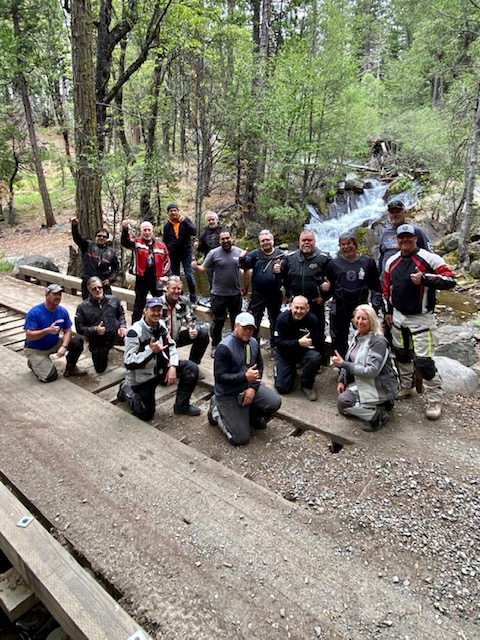 cemetery and just above the town, are the Chinese burial grounds, half hidden among the pines. Most or all of the bodies have long been removed from their graves and taken back to China. The old site of Dutch Flat Chinatown, located near the railroad tracks, one mile above the main townsite was once a large population during its heyday but has now nearly faded away into obscurity.

Today the quiet little mountain town of Dutch Flat has been preserved against the ravages of fire, storm, and commercialism that have changed other mining communities throughout the Mother Lode region. Among the oldest buildings in town are the Odd Fellows Hall, Masonic Temple, the Dutch Flat Hotel, Methodist Church, and the Dutch Flat Trading Post including the small General Store that’s still in operation and provides a much-needed stop for a cold drink after exploring the remote Bear River Canyon. These unique historic buildings have all survived the test of time from a bygone era known as the California Gold Rush.

Bear River Canyon Adventure ride is a bucket list ride for those who have the desire to explore deep into the forest on an adventurous off-road wagon route, to visit an abandoned mining site in the middle of nowhere including a fascinating mining town from the California Gold Rush to experience an exciting day of ADVENTURE riding!

OPTIONAL HOTEL Prior to Event: (Hotel not included)
Riders are responsible to book their hotel reservations.
-Hampton Inn and Suites, 155 Placerville Rd, Folsom, CA 95630 (916) 235-7744
Additional hotels are available in Folsom CA.
Truck/trailering your bike? Parking is available at the meeting location. 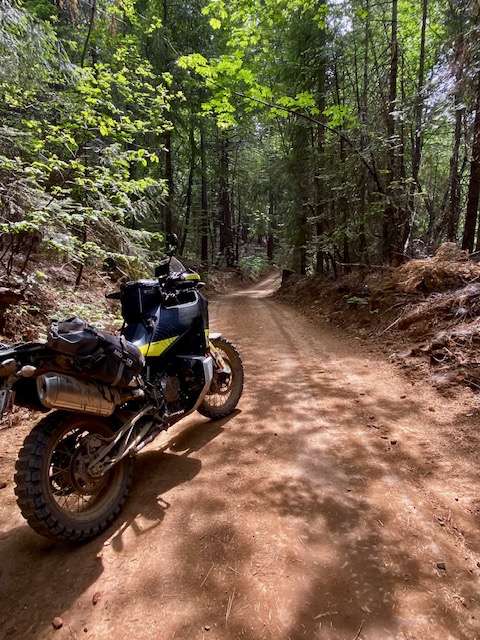 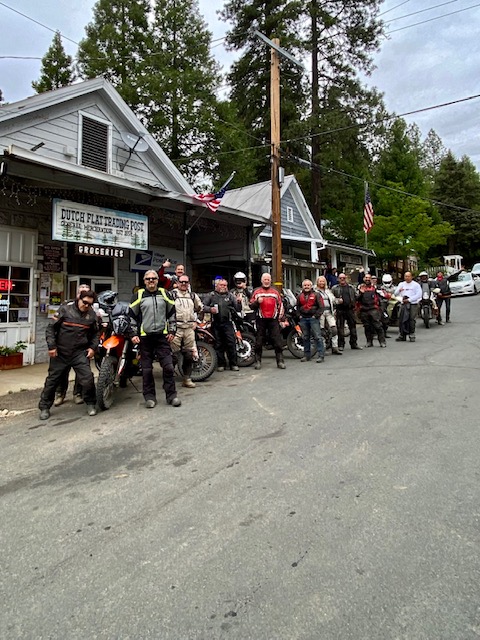 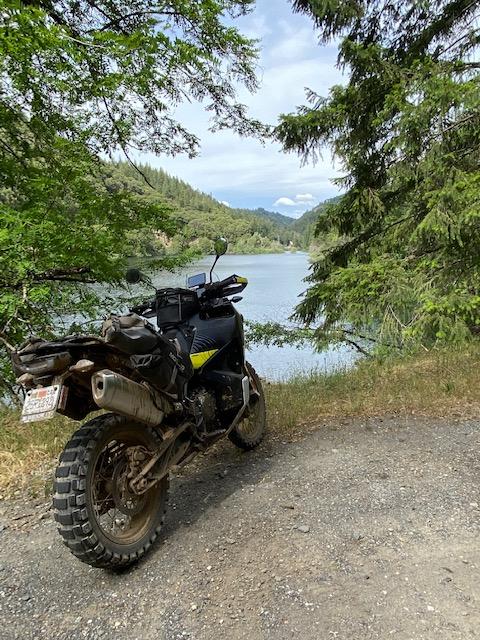 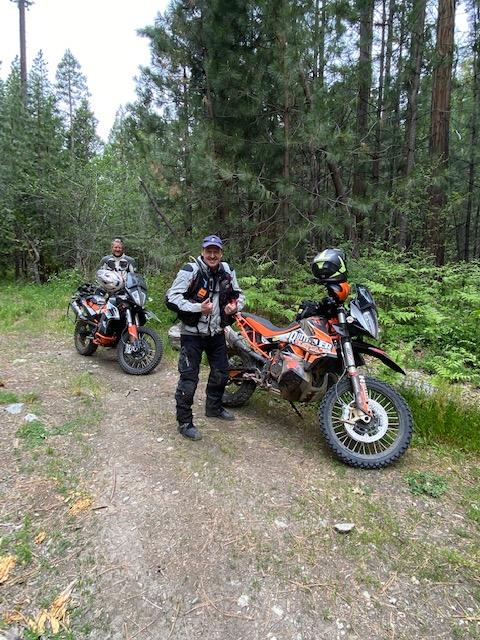 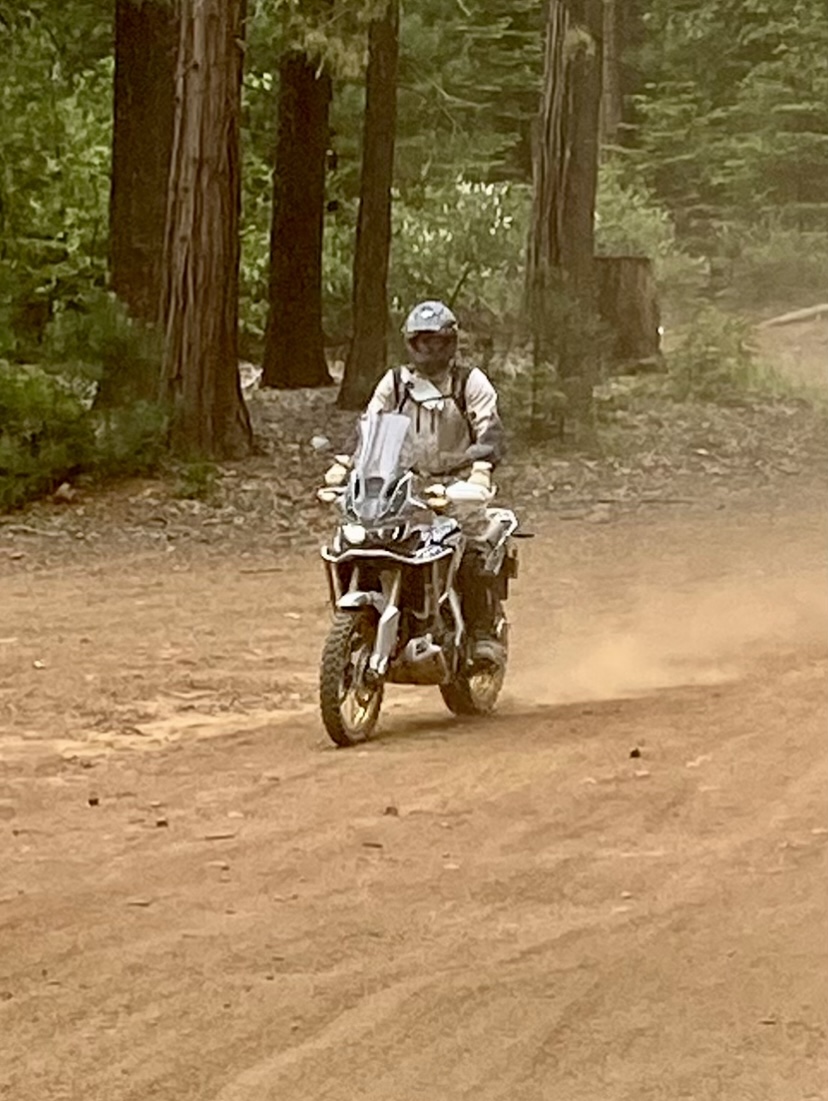