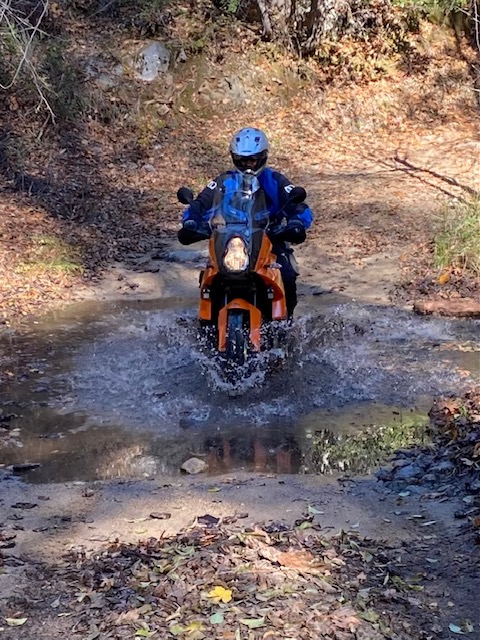 Ever dream of EXPLORING a remote river canyon by means of your dual-sport adventure motorcycle? Find yourself dreaming of the opportunity to get out and explore OFF-ROAD routes deep in the woods where most dare to explore? Well, here’s your opportunity to fulfill your dream ADVENTURE ride in the remote corners of the Stanislaus Canyon.

Stanislaus Canyon Adventure ride provides an amazing combination of deep woods, steep canyons, and remote off-road terrain perfect for dual-sport adventure riding. You will find yourself deep in the woods overlooking steep canyons of all three forks of the wild and scenic Stanislaus River with no signs of civilization and no worries of getting lost on this fully guided adventure.

Your adventure ride starts in the Gold Country and ventures out on curvy back roads and into the forest where your off-road adventure begins. You will soon find yourself exploring remote dirt roads past old-growth forest, cascading creeks lined with ferns including forest plants and animals. Some of the creatures that inhabit these remote wilderness forests include bears, mountain lions, bobcats, foxes, deer, raccoons, grey squirrels, and the occasional Bald Eagle. “Don’t forget your camera” 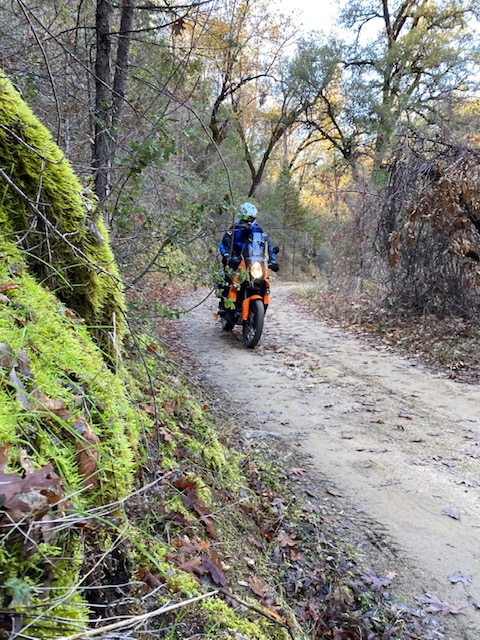 Your off-road adventure will travel through historic mining camps located on the Stanislaus River from the California Gold Rush. The Stanislaus River is one of the major gold-bearing rivers crisscrossing the Mother Lode in California. The river is the largest tributary of the San Joaquin River. It is roughly 95 miles in length, and it is divided into three forks (the North, Middle, and South) with the longest fork being the Middle Fork. The river originates from the Stanislaus National Forest and flows into New Melones Lake onward to the Sacramento-San Joaquin River delta. The Stanislaus River has a rich gold rush history with most of the known gold mining having been done in the late 1840s and 1850s when the Californian gold rush was at its peak.

The Stanislaus River located in the northern-central Sierra Nevada was originally inhabited by Native Americans 14,000 years ago. The first people of European descent didn’t arrive until 1806. In that year, Gabriel Moraga led an expedition to the area to survey possible inland mission sites. Although he decided against extending the Spanish mission system into the interior of California, he did name several prominent features of the landscape. Gabriel Moraga named the Calaveras River, Río de las Calaveras, or “River of Skulls,” after finding a large number of human remains along its banks. He named another river Río de Nuestra Senora de 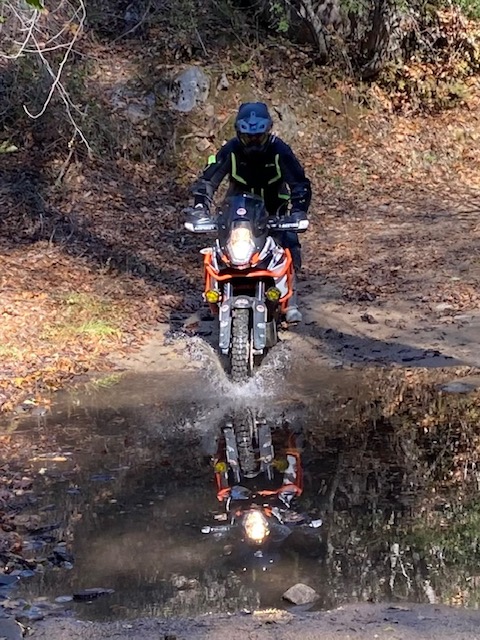 Guadalupe in honor of the Virgin Mary. While the first river is still called the Calaveras and lends its name to the county through which it runs, the other is now known as the Stanislaus River. The Stanislaus River was named in honor of Chief Estanislao Kucinich, a Yokuts Indian whose tribal homeland centered around the river near modern-day Ripon.

Chief Estanislao was raised on Mission San Jose, where he learned to read and write and was appointed a leader of his people by the Franciscans. While he admired the head of the mission, Father Duran, he became increasingly disillusioned with the mission system. At the age of 28, Estanislao and a group of his fellow tribesmen escaped the mission and fled back to their homeland on the banks of the Stanislaus River. From there, they raised an army of perhaps 1,000 fighters from a wide assortment of tribes and linguistic groups. They led raids on ranchos and encouraged uprisings on the missions in an effort to expel the Mexican authorities from the interior. As the uprising grew, Father Duran, Estanislao’s former teacher, asked for military assistance to put an end to the rebellion. In a letter to military leaders in San Francisco, he wrote: “Everything depends upon capturing dead or alive a certain Estanislao from this mission.” Several campaigns were mounted to put an end to the uprising and capture Estanislao. One by one, they were repulsed with numerous casualties on both sides. The rebels incorporated European tactics, employing a system of defensive trenches 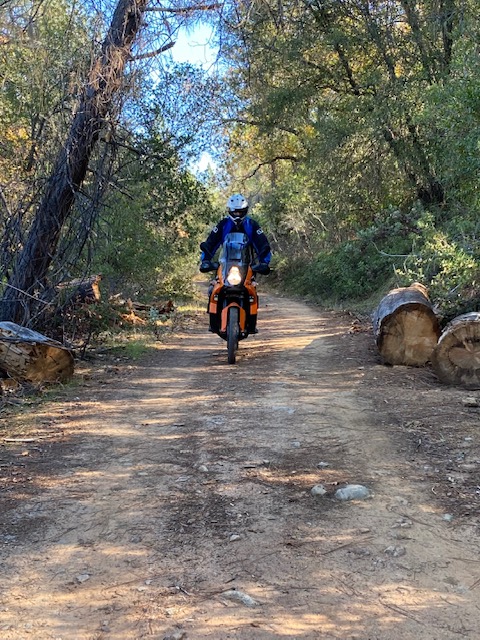 that caught the Mexican soldiers off guard. In 1829, Mariano Guadalupe Vallejo led a force of 107 soldiers and 50 mission Indians back to the Stanislaus River. It was the largest army yet formed in California by either the Spanish or the Mexicans. Vallejo and his men set fire to the thick forest from which Estanislao and his men preferred to fight, forcing the natives to retreat. As they tried to escape the flames, they were picked off by the Mexican army. While some, including Estanislao, managed to escape, many were killed. In the morning only three women were found alive in the smoldering forest. All three were executed for playing a part in the uprising. Although Vallejo’s campaign was a battlefield victory, the rebellion was never completely suppressed. Estanislao and his followers continued their raids, and the Mexicans abandoned the San Joaquin River and its tributaries to the natives, where they lived in relative isolation until the beginning of the Gold Rush in 1848.

As Vallejo and other Mexicans attempted to control California, others began making incursions into the area. In 1826, Jedediah Smith led a group of 15 American trappers into Southern California, becoming the first Americans to enter the state overland from the east. The party made its way up the Central Valley, trapping beaver and other games along the way. In 1827, Jedediah Smith and his men followed the North Fork of the Stanislaus River up the western slope of the Sierra Nevada. Crossing near Ebbetts Pass, they completed the first recorded 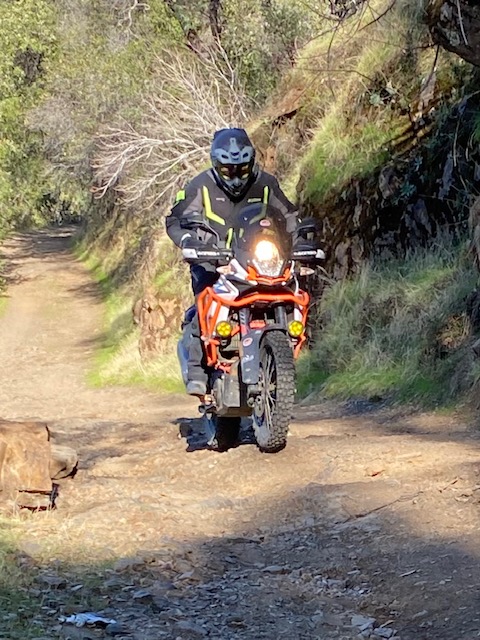 crossing of that formidable mountain range. Smith was soon followed by other mountain men and explorers. In 1841, the Bidwell-Bartleson party crossed over the Sierra from the east, becoming the first overland immigrant train to arrive in California. They accidentally strayed south of the established trails, but luckily stumbled upon the Stanislaus River, which guided them down to the Central Valley. When miners arrived in Calaveras County in 1848, they established some of the earliest towns along the Stanislaus. Mexican miners established the first mining camp along the river, which they called Melones, after the melon seed-shaped gold nuggets that they found there. Another settlement, Robinson's Ferry, quickly became one of the busiest river crossings in the Gold Country. Bret Harte worked a claim near Robinson’s Ferry during the height of the Gold Rush, gathering both gold and material for a lifetime of literary output. 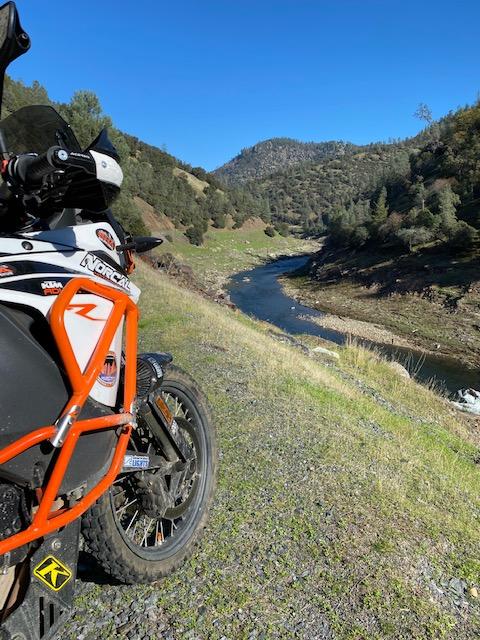 In 1926, the first Melones Dam was constructed, and the first reservoir was created. As the water rose, the town of Melones was protected by a retaining wall. However, in the late 1970s, Melones, Robinson’s Ferry, and other historical towns were washed away by the creation of the massive New Melones Reservoir. The Stevenot Bridge on Highway 49 now towers over the sites of these former mining towns. Much has changed since Estanislao mounted his rebellion against the Mexican authorities in 1828. His tribal homeland is now the site of sprawling farms and encroaching urban areas. The natural flow of the river that bears his name is obstructed by 28 dams to meet the needs of a growing population.

Even still, much of the Stanislaus River remains surrounded by wild, undeveloped land that is seemingly untouched by civilization. It’s easy to imagine that its rugged canyons and boiling rapids looked much the same to the intrepid travelers who first arrived in the area 14,000 years ago. While Estanislao would have a hard time recognizing his homeland in modern-day Ripon, the remote sections of the upper Stanislaus River Canyon provide a wild and scenic landscape much as it did before the California Gold Rush. 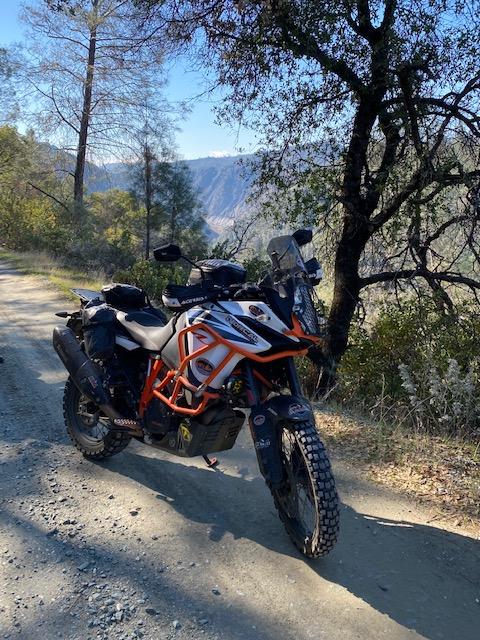 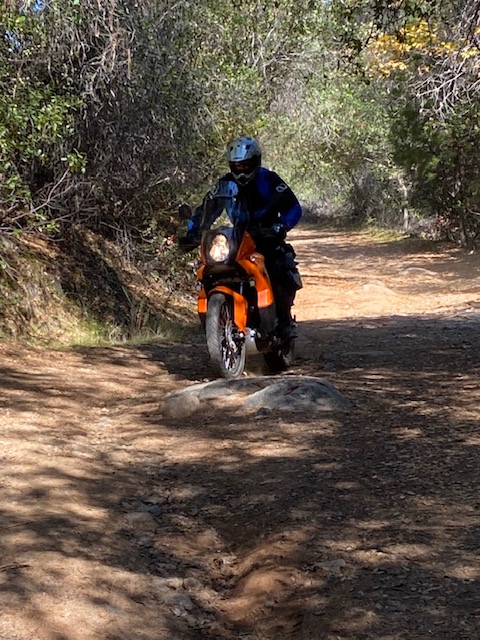 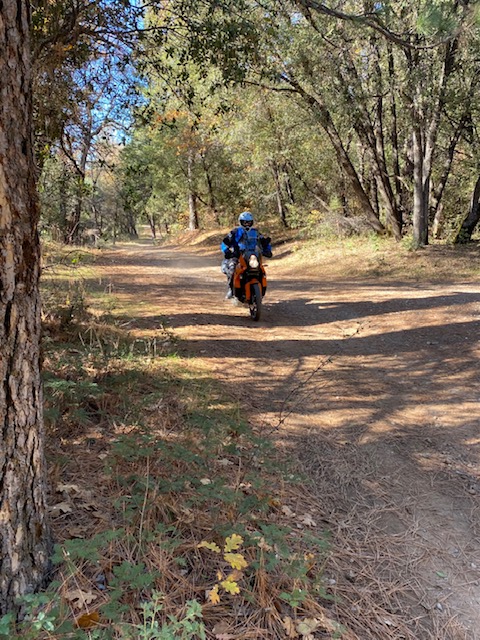 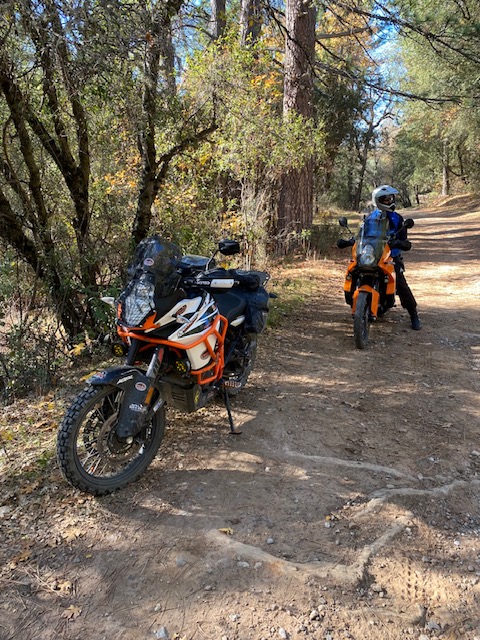 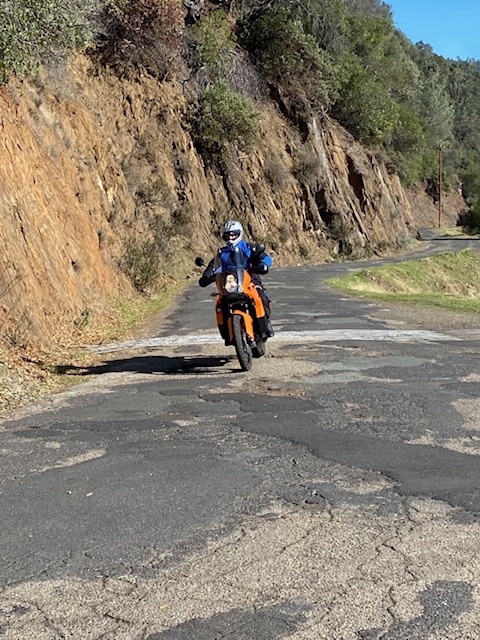 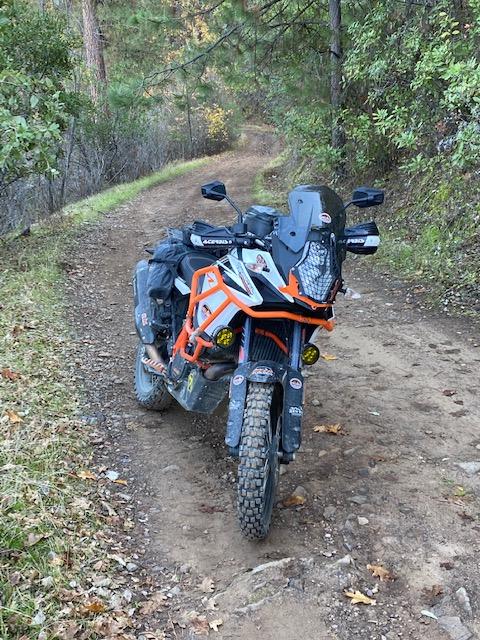 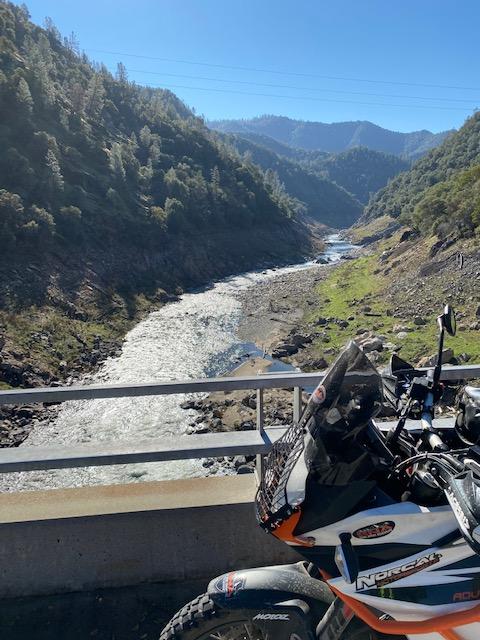 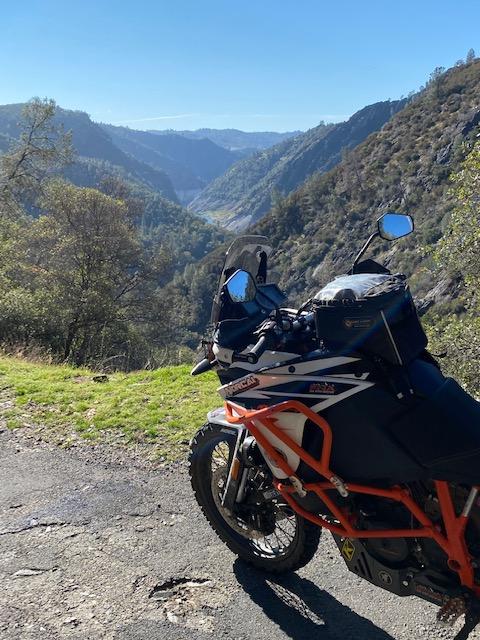 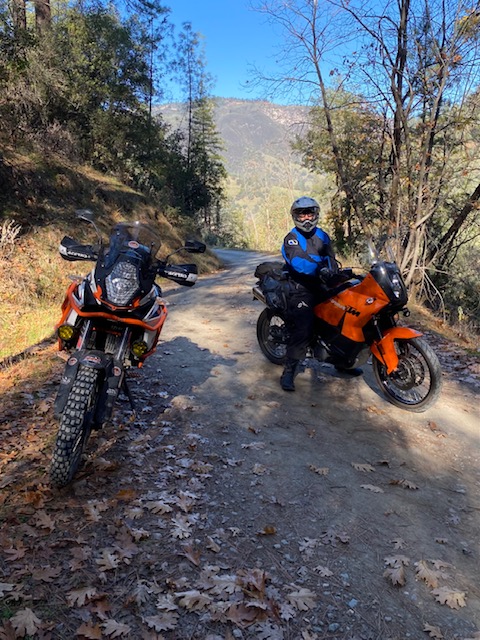